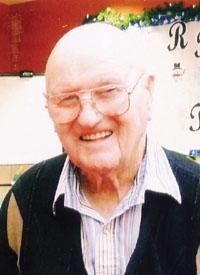 Glenn Howard Alton Husband passed away peacefully the morning of December 17, 2012 in Shaunavon at the age of 93.
Glenn was born April 28, 1919 on the Husband farm near Claydon, Sask. He and his siblings attended Avon and Claydon schools until the family moved to Robsart and later to Melfort. There Glenn tried his hand at various jobs from shovelling gravel to selling newspaper subscriptions. He moved back to Robsart in 1938 to work, then went to Terrace, B.C. for army training.
After discharge, Glenn lived in Hart, Sask buying grain for the Pioneer and while there married Eleanor (Nell) DeCrane December 22, 1944. In 1945 they moved to the farm near Robsart to work with Nell’s parents, where they remained, working together and raising two children, Gary James and June Dianne.
Glenn and Nell were very involved in the Robsart community: curling, square dancing, serving on the hall board, Robsart rural telephone company, and leading 4-H. In later years, they spent nearly every Saturday night at the Seniors Centre in Eastend enjoying pool, cards and dancing. Glenn always enjoyed spending time with his grandchildren, sharing with them his collections and playing cards and games with them.
After Nell passed away in 1990, Glenn spent time in various locations including Chilliwack, Maple Creek and Eastend, always returning to the farm. He settled in Frontier in 2005. Glenn was never a man to sit idle. Even after illness restricted Glenn from driving, he was often seen traveling about Frontier on  his scooter or golf cart. In 2010 he and his companion Eveline Evenson moved to Shaunavon Care Centre where they resided until his passing.
Glenn was predeceased by his parents Wilfred and Frances, an infant son Murray, his brother Max and his loving wife Nell.
Glenn is survived by two sisters Blanche Culley Elinor (William) Semenchuk and brother Wayne (Patricia); son Gary (Denise) and grandson Eric; daughter June (Allen) Madson, grandaughters Lindsay (Kent) Mohn and Melissa Madson; nieces and nephews and companion Eveline Evenson.
A celebration of Glenn’s life was held at Bethel Lutheran Church in Frontier on December 21, 2012 with Pastor Kurschner officiating. Glenn’s granddaughters Melissa Madson and Lindsay Mohn read the eulogy and provided special music. Interment followed in Robsart Cemetery with Lindsay and Kent Mohn offering a graveside service. Glenn’s brother Wayne Husband was urn bearer and all those who shared in Glenn’s life were considered honorary pallbearers.
Friends who wish to, may rememebr Glenn with a gift to Kinsmen Telemriacle, something that Glenn watched and donated to every year.
To email an expression of sympathy you may visit www.gonebutnotforgotten.ca.
Binkley’s Funeral Service, Maple Creek and Leader, in charge of arrangements. 306-662-2292