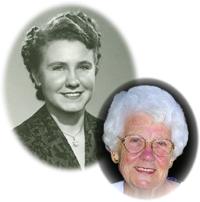 1931 ~ 2013
Mrs. Vivian May Metcalf, beloved wife of the late Mr. Gerald (Jerry) Metcalf, passed away at the Medicine Hat Regional Hospital on Wednesday, January 9, 2013, at the age of 81 years.  Vivian was born May 7, 1931 in Drumheller, a daughter to proud parents, Arthur and Elise Ragon.  She was raised on the family farm in the Rosedale area near Drumheller.  Following her years of schooling, she started to work at the Star Mine General Store.  This is where she met her future husband, Gerald.  They were married on June 28, 1952.  In 1960 they moved with their young family to Medicine Hat where she had resided ever since.  Vivian was a family oriented lady who enjoyed her life.  She liked to tend to her garden, sew, crochet and knit in her later years.  She enjoyed the outdoors and liked to go camping with her family.  For over 50 years, Vivian was a dedicated member of Fifth Avenue Memorial United Church.  Her memory will be deeply missed by her children, Blaine (Rhonda) Metcalf, Derryl (Beth) Metcalf, Debra (Norm) Andrew, Melanie Metcalf and Nadine (Mike) Badry;  grandchildren, Nicole, Derek, Nathan, Evan and Kaitlyn as well as numerous nieces and nephews.  She was predeceased by her husband, Gerald (Jerry), her parents and sisters.  The Funeral Service will be held at Cook Southland Funeral Chapel, 901 – 13 Street S.W., Medicine Hat on Tuesday, January 15, 2013, at 11:00 A.M. with Reverend Kevin Johnston officiating.  Columbarium placement will follow at Hillside Cemetery.  (Condolences may be expressed by visiting www.cooksouthland.com)  Memorial donations in Vivian’s name may be made directly to the Heart & Stroke Foundation of Alberta, 124, 430 – 6 Avenue S.E., Medicine Hat Alberta, T1A 2S8 or to the Alberta Lung Association, P.O. Box 4700, Stn South, Edmonton, Alberta, T6E 9Z9.  Honoured to serve the family is COOK SOUTHLAND Funeral Chapel, 901 – 13 Street S.W., Medicine Hat, Alberta, T1A 4V4.   Telephone:  403-527-6455.