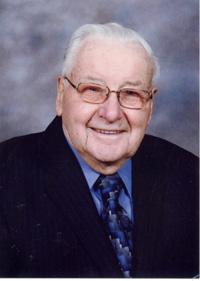 Mr. Dave Neufeld, beloved husband of Myrtle, of Leader, Sask., passed away peacefully on Saturday, January 12, 2013 at the age of 90 years. Dave leaves to cherish his memory 3 children: Bob (Arlie), Wes (Maureen), and Rita (Larry) Ausmus, 8 grandchildren: Chet (Candace) Neufeld, Kendra (Kelsey) Brandt, Ken Neufeld, Tim Neufled, Clint (Nicole) Ausmus, Brad (Megan) Ausmus, Doug (Michelle) Ausmus, and Darcy (Ivy) Ausmus, and 5 great grandchildren, 1 brother, Aaron (Edna) Neufeld. He was predeceased by his first wife, Irene, his parents Jacob and Mariea, brothers Jacob and Peter, and 3 brothers and twin sisters in infancy.
Dave was born near Rush Lake, SK. on March 22, 1922. He moved to Meadow Lake, SK. with his parents where he was raised. He married Irene Rutz on November 23, 1948. They had one son, Bob. Irene passed away of polio on November 14, 1952.
Dave and Bob moved to Leader in 1953. He worked for Miller and Rutz Ford selling cars. On August 1, 1956, Dave married Myrtle Donst. They had 2 children, Wes and Rita. In 1963 Dave and Myrtle purchased a grocery store in Prelate, SK. which they operated for 5 years. They then moved the store to Leader and operated it until 1979.
Dave worked as parts man for Triod Supply. In 1981, Dave, with his son Wes, purchased Triod Supply and he continued working there until he retired in 1993.
Dave loved camping, fishing, and traveling abroad. He enjoyed having his family and grandchildren close by.
Dave was active in the community, a founding director of the Prelate Credit Union, a Lion’s member, and an executive member of the Leader Board of Trade, and a church board member.
He will me missed by all who knew him and shared in his life.
Funeral services will be held in the Leader Alliance Church on Wednesday, January 16 at 2:00 p.m. CST with Pastor Jason Hodge officiating. Interment will follow in the Leader Cemetery. Friends who wish to, may remember Dave with a gift to the Gideon Bible Society or to the Heart and Stroke Foundation. Binkley’s Funeral Service, Maple Creek and Leader, in charge of arrangements. 306-662-2292