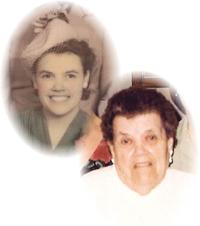 Katherine “Kay” Thompson, beloved wife of the late Harry Thompson, passed away at Good Samaritan Society South Ridge Village on Tuesday, January 15th, 2013 at the age of 92 years. Kay leaves to cherish her memory four sons, Lynn (Susan), Gordon, Sid (Joan), and Barry (MaryJean); three daughters, Linda (Ron) Windrim, Kathy (Dale) Garinger, and Cindy (Terry) Babiy. She was the proud grandmother of eleven grandchildren, Michelle (Jason) Bodnarchuk, Kevin Martin, Jennifer Garinger, Blair Garinger, Craig (Erica) Windrim, Jonathan Babiy, Lindsay (Tyrell) Parenteau, Greg Thompson, Megan Thompson, Mike (Michelle) Long and David Long; and great grandmother to Lyndon and Adrianna Bodnarchuk and Barrett Long. Kay is also survived by her sisters, Violet Weiss and Carrie Schneider; and her son-in-law, Howard Martin; plus numerous nieces and nephews. Kay was predeceased by her husband of 43 years, Harry Thompson (1985); her daughter, Vicky Martin (2007); her parents, Jacob and Magdelena Bender; and her siblings, John, Philip, Jack, Freddie, Helen Frank, Martha Opp, Liz Hughes, Christine Krassman and Lena Deering. Kay was born November 28th, 1920 in Hilda, Alberta to Jacob and Magdelena Bender. She married Harry Thompson on May 11th, 1942. Together they farmed in Rapid City, Manitoba until 1950. When Harry was offered a job working with the Defence Research Establishment Suffield, they relocated to Redcliff and then to Ralston. They moved the family to Medicine Hat in 1963. Kay spent most of her life as a stay-at-home mom raising her eight children. She tended to a big vegetable garden and always had flowers in the front yard. She enjoyed gardening, cooking, baking and family outings -camping and fishing at Lake Newell or Elkwater. She was a huge Blue Jays fan and an avid bingo player. Family was most important to Kay and she was happiest when everyone managed to get together. She will be missed by her family and friends but we can be assured she is now content and with her dear Harry again. Those wishing to pay their respects may do so at SAAMIS MEMORIAL FUNERAL CHAPEL, #1 Dunmore Road SE, on Thursday from 7:00 to 9:00 p.m. and on Friday from 12:00 to 12:55 p.m. The Funeral Service will be held in SAAMIS MEMORIAL FUNERAL CHAPEL on Friday, January 18th, 2013 at 1:00 p.m. with Pastor Garth Wehrfritz-Hanson officiating. Interment will follow in the Family Plot at Saamis Prairie View Cemetery. Memorial gifts in Kay’s memory may be made to the Good Samaritan Society, 550 Spruce Way SE, Medicine Hat, Alberta, T1B 4P1. Condolences may be sent through www.saamis.com or www.gonebutnotforgotten.ca or to condolences@saamis.com subject heading Kay Thompson. Radio funeral announcement can be heard on Thursday around 12:35 p.m. on 93.7 Praise FM. Funeral arrangements are entrusted to SAAMIS MEMORIAL FUNERAL CHAPEL AND CREMATORIUM, “The Chapel in the Park”, locally owned and directed. Should you wish any additional information, please telephone (403)528-2599