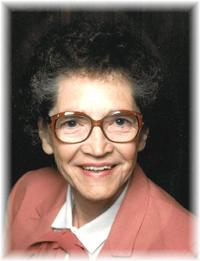 Irma Helena of Kelowna, passed away on January 15th, 2013 at the Sutherland Hills Rest Home. Irma was born in Shamrock, Saskatchewan on April 16th, 1920 and was the fourth child of twelve. Irma married Isaac Hoffman on April 7th, 1937 and also in that same year they moved to Vernon, BC and then in 1976 retired to Kelowna. Irma is survived by her son Curtis, son-in-law Arthur, two granddaughters Marie (Kory) and Rhonda (Jamie), one grandson Randy (Denise) and three great grandchildren. Predeceased by her husband will be held. Arrangements entrusted with First Memorial Funeral Services, Kelowna, B.C. 250-762-2299