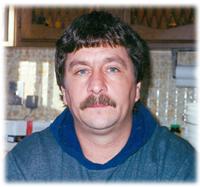 With heavy hearts the family of Barry Minshull, beloved husband of Joanne Minshull, announce his unexpected passing while at the Medicine Hat Regional Hospital on Monday, January 21, 2013, at the age of 51 years. Barry will be deeply missed by his wife, Joanne;  sons, Douglas (Gillian) of Edmonton and David of Medicine Hat;  a brother, Dale Labadie of Medicine Hat and a sister, Tammy (David) Cadotte of Chatham-Kent, Ontario;  a niece, Emily Ann;  a nephew, Bradley as well as the numerous extended family and friends he leaves behind.  He was predeceased by his mother, Joanne.  Barry was born in London, Ontario, on March 3, 1961.  He was raised and received his education in Chatham, Ontario.  It was later on in Barry’s teenage years that he moved to Medicine Hat.  In 1983, he met the love of his life, Joanne, and they were married in 1987.  Construction was his passion and Barry enjoyed his job out at the Base.  He could often be found watching the local Drag Races and volunteered much of his time there.  Barry made the most of his time away from work.  Whether spending time with his best friend and faithful companion, Gizmo;  having a laugh with family, exploring on his computer, flying his R/C helicopter or taking his motorcycle out for a ride.  He had an easy-going, warm-hearted nature about him making it impossible to get upset with him when he’d pull one of his quick-witted pranks on unsuspecting friends and family!  Barry’s life will be celebrated at Cook Southland Funeral Chapel, 901 – 13 Street S.W., Medicine Hat on Saturday, January 26, 2013, at 11:00 A.M. with Life Celebrant Gerry Getz officiating.  Those wishing to pay their respects may do so starting one hour prior to the service.  (Condolences may be expressed by visiting www.cooksouthland.com) Memorial donations in Barry’s memory may be made directly to the Medicine Hat Drag Racing Association, 3271 Dunmore Road S.E., Unit 3 Box 306, Medicine Hat, Alberta, T1B 3R2. Honoured to serve the family is COOK SOUTHLAND Funeral Chapel, 901 – 13 Street S.W., Medicine Hat, Alberta, T1A 4V4.  Telephone:  403-527-6455.

No Condolences for “BARRY MINSHULL”