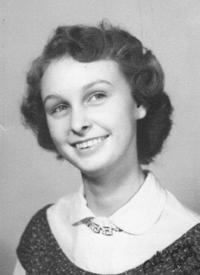 Mrs. Marilyn Jean Mauer, beloved wife of Mr. Reinhold “Ron” Mauer of Medicine Hat, passed away on Tuesday, January 22nd, 2013 at the age of 72 years. Marilyn also leaves to cherish her memory two sons, James (Dora) of Wildomar, California and David (Michelle) of Medicine Hat; one daughter, Abbi (Keith) Muncy of Midland, Texas; five grandchildren, Mark Mauer, Avery Muncy, Jared Muncy, Daniel Mauer, and Roman Mauer; one sister, Jeri (Jim) Hogan; and two nieces, Chelsea and Ashley Crawford. Marilyn was predeceased by her parents, Charles and Verna Evans; and one grandson, Chad Scott in 1986. Those wishing to pay their respects may do so at SAAMIS MEMORIAL FUNERAL CHAPEL, #1 Dunmore Road SE, on Friday from 7:00 to 9:00 p.m. and at HILLCREST EVANGELICAL MISSIONARY CHURCH, 3785 – 13th Avenue SE, on Saturday from 10:00 to 10:55 a.m. The Funeral Service will be held in HILLCREST EVANGELICAL MISSIONARY CHURCH on Saturday, January 26th, 2013 at 11:00 a.m. with Reverend Jerry Daniels and Reverend Mark Bolender co-officiating. A Private Family Interment will take place in the Family Plot at Redcliff Cemetery. Memorial gifts in Marilyn’s memory may be made to the Charity of One’s Choice. Condolences may be sent through www.saamis.com or www.gonebutnotforgotten.ca or to condolences@saamis.com subject heading Marilyn Mauer. Radio funeral announcement can be heard on Friday around 12:35 p.m. on 93.7 Praise FM. Funeral arrangements are entrusted to SAAMIS MEMORIAL FUNERAL CHAPEL AND CREMATORIUM, “The Chapel in the Park”, locally owned and directed. Should you wish any additional information, please telephone (403)528-2599