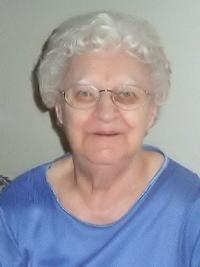 Monica Josephine Baron passed away at the Good Samaritan’s on Sunday, January 27, 2013, at the age of 82 years, following a brief but courageous battle with cancer. She leaves to cherish her memory her brother Philip (Mona) Baron of Swift Current; one sister, Rose Fauth of Medicine Hat; sisters-in-law, Mina Baron of Medicine Hat, Jane Baron of Calgary and Mary Bonogofsky of Medicine Hat, as well as numerous nieces and nephews. She was predeceased by her parents, Valentine and Monica Baron; brothers, Ralph, Matthew, Ludwig (Aggie), Joseph, John (Rose); one sister, Tillie (John Fauth) and a brother-in-law, Alex Fauth. Monica was born on August 4, 1930, spending her early years on the farm south of Burstall and attending Monmouth School. In 1952 she moved to Richmound with her parents where she resided until 1971, at which time she moved to Medicine Hat. She was employed by the Flamingo Motel, Eatons and 17 years at K-Mart retiring at the age of 60. She resided at St. Joseph’s Home for many years until making the move to the Good Samaritan’s in June of 2012. Those who wish to pay their respects may do so at the PATTISON FUNERAL HOME on Thursday evening from 6:30 – 9:00 p.m. and at the church on Friday from 12 noon – 12:55 p.m. Family and friends will gather for prayers in the PATTISON CHAPEL on Thursday evening at 7:00 p.m. The funeral mass will be celebrated in the St. Patrick’s Roman Catholic Church (238 2nd Ave N.E.) on Friday, February 1, 2013 at 1:00 p.m. with the Very Reverend Fr. Long Vu, Celebrant. Interment will follow in the Hillside Cemetery. As an expression of sympathy donations may be made to the Good Samaritans c/o 550 Spruce Way SE, Medicine Hat, AB T1B 4P1. To e-mail an expression of sympathy, please direct it to: pattfh@telusplanet.net subject heading: Monica Baron, or you may visit www.gonebutnotforgotten.ca and leave a message of condolence. Funeral Arrangements are by the PATTISON FUNERAL HOME AND CREMATORIUM 540 South Railway St. SE, Medicine Hat T1A 4C2