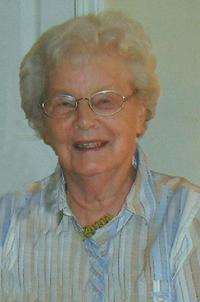 Dorothy Sponholz of Medicine Hat passed away on Tuesday, January 29, 2013, at the age of 93 years, beloved wife of the late Elmer Sponholz. She leaves to cherish her memory her daughters, Hazel Bohnet of Lethbridge and Barbara (Stan) Schlaht of Okotoks; six grandchildren, Clint Bohnet (Jane Tink) , Ross (Lana) Bohnet, Warren (Peggy) Bohnet, Wanda (Ian) Clifton, Mark Bohnet and Todd (Nikki) Schlaht; several great grandchildren; two sisters, Rachael Seitz of Claresholm and Esther Rieger of Medicine Hat as well as numerous nieces and nephews. She was predeceased by her parents, Barbara and Carl Nittel; her husband, Elmer; two brothers, Fred Nittel and Art Nittel; six sisters, Selma Rath, Katie Rath, Hilda Pols, Tillie Wahl, Leah Seitz and Irene Wirsch. Dorothy was born on September 7, 1919 at Little Plume on the family farm where she was raised. She married Elmer Sponholz on December 14, 1940. Together they lived in Medicine Hat and Dorothy worked for several ranchers in the Eagle Butte area, and especially enjoyed working for Dorothy Brown. She worked as a cook in the Haven of Rest beginning in 1965, for five years. Dorothy then worked for fifteen years in the Medicine Hat School District as a custodian. She enjoyed baking, looking after her grandchildren, playing cards and working in her yard and garden. Family and friends who wish to pay their respects may do so at the PATTISON FUNERAL HOME on Friday evening from 7:00 – 9:00 p.m. and on Saturday from 12:00 noon – 12:55 p.m. The funeral service will be held in the PATTISON CHAPEL on Saturday, February 2, 2013 at 1:00 p.m. with Rev. Art Brown officiating. Interment will follow in the Hillside Cemetery. As an expression of sympathy donations may be made to the Riverview Care Centre 603 Prospect Drive SE, Medicine Hat, AB T1A4C2 . To e-mail an expression of sympathy, please direct it to: pattfh@telusplanet.net subject heading: Dorothy Sponholz, or you may visit www.gonebutnotforgotten.ca and leave a message of condolence. Funeral Arrangements are by the PATTISON FUNERAL HOME AND CREMATORIUM 540 South Railway St. SE, Medicine Hat T1A 4C2

No Condolences for “SPONHOLZ”