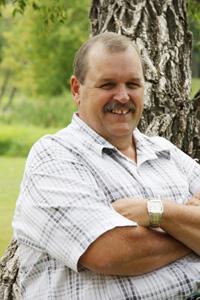 With heavy hearts, we announce the passing of Gerald “Jerry” William Petrick on Sunday, February 3rd, 2013 at the tender age of 55. He leaves to cherish his memory the love of his life, his wife, Donna; and his pride and joys, Curtis Petrick (Lisa Bamhare) and Dawn (Adam) Cosgrove. He also leaves behind his brothers, Rick (Sharon) Petrick and Lloyd (Sandra) Petrick; his sister, Penny Gardner (Grahame Kimberley); his in-laws, George (Barbara) Erick; his sister-in-law, Brenda (Collin) Richmond; his brother-in-law, Eugene Erick; his brother from another mother, Rob (Jeanette) Macaulay; as well as numerous nieces, nephews, relatives and friends. Jerry was predeceased by his parents, Shorty and Isobel Petrick; as well as his brother-in-law, Dwayne Erick.
Jerry was born on May 25th, 1957 in Medicine Hat, Alberta. He met and married his soulmate, Donna Erick on October 7th, 1978 and, together, they began building their happily ever after. Jerry began working for The City of Medicine Hat in 1978 and was looking forward to retirement after 35 years of service. He was a dedicated and hardworking man that lived for the simple life.
Jerry reveled in being the best dad he could. Whether it was helping his kids out in their homes, taking time to visit daily, attend sporting events and build VW’s with his son or dream of gardens, life, and all of its possibilities with his daughter. Jerry lived for his wife and their marriage and would make sure she knew every day how much he loved her. He poked, prodded and teased her but never left her without a kiss. Theirs was truly a love story fit for fairy tales.
Jerry had a special place in his heart for the family cabin in Elkwater. It was his second home growing up that was filled with many fond memories and he was thrilled to provide those same experiences for his own family. His passions in life were visiting with his nieces and nephews, golfing with his siblings and best friend, bbqing with a beer in hand, gardening with his wife and spending time with his family. He touched so many lives with his love, his laughter and his larger than life personality. He had the biggest heart in the world and he will forever be missed. Jerry’s family would like to say a special thanks to the staff of the Carmel Hospice in Medicine Hat. Their kindness, support and care will forever be appreciated. In lieu of flowers, donations can be made to Carmel Hospice, St. Joseph’s Home, 156 – 3rd Street NE, Medicine Hat, Alberta, T1A 5M1 in memory of Jerry Petrick. The Memorial Service will be held in the ROYAL CANADIAN LEGION, 702 – 2nd Street SE, on Friday, February 8th, 2013 at 1:30 p.m. with Reverend Dr. Shane P. Andrus officiating. Condolences may be sent through www.saamis.com or www.gonebutnotforgotten.ca or to condolences@saamis.com subject heading Jerry Petrick. Radio funeral announcement can be heard on Thursday around 12:35 p.m. on 93.7 Praise fm. Funeral arrangements are entrusted to SAAMIS MEMORIAL FUNERAL CHAPEL AND CREMATORIUM, “The Chapel in the Park”, locally owned and directed. Should you wish any additional information, please telephone (403)528-2599