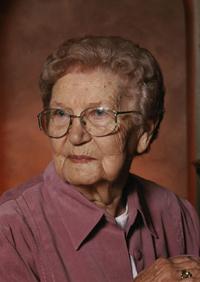 1914 – 2013
Anna Margaret Kambeitz of Lethbridge, beloved wife of the late Benedict Kambeitz, passed away on Tuesday, February 5, 2013 at the age of 98 years.
Relatives and friends are invited to Prayers at the Southland Funeral Chapel, 5006 – 48 Avenue, Taber on Thursday, February 7, 2013 at 5:00 P.M.
The Funeral Mass will be celebrated at St. Augustine’s Catholic Church, 5009 – 48 Avenue, Taber on Friday, February 8, 2013 at 11:30 A.M with Reverend Vincent TuanHa Celebrant. Burial to follow at the Taber Memorial Garden. Condolences may be forwarded by visiting our website at www.southlandfuneral.com.
Anna is survived by her children George (Phyllis) Kambeitz of Lethbridge, Leonard (Elvena) Kambeitz of Bow Island, Shirley Whitney of Lethbridge and daughter-in-law Eileen Kambeitz of Calgary.She will be dearly missed by sixteen grandchildren, twenty five great grandchildren and one great great grandchild; two brothers Andrew (Anne) Roth of Medicine Hat and Peter Roth of Bow Island; sister Josephine (John) Holton of Medicine Hat; sister-in-law Mary Roth of Medicine Hat, brother-in-law Steve Hnatiuk of Lethbridge and by numerous nieces and nephews.
Besides her parents, Anna was predeceased by a daughter and son-in-law Josephine and Fred Krokosh; son Anthony Kambeitz; grandchildren Joanne Krokosh and Kent Whitney; siblings Magdalena and her husband Matthies Lyczewski, Elizabeth Roth, Jack Roth, Margaret Hnatiuk, Barbara and her husband John Stappler, George Roth and by numerous brothers-in-law and sisters-in-law.
Anna was born August 23, 1914 in Bow Island to Joseph and Elizabeth Roth and was raised on the family farm south of Bow Island. On November 14, 1932 she married Benedict Kambeitz and they raised their family while farming south of Grassy Lake. In 1962 they moved into Taber before Benedict’s passing in 1964. She continued to reside in Taber until 2002 when she relocated to Lethbridge.
Anna was a member of the Catholic Women’s League and received her seventy five year membership pin. She enjoyed arts, crafts and weaving. Anna loved to travel, visiting many countries throughout the world right up until the age of eighty two. She will be sadly missed but fondly remembered by all who knew her.
If friends so desire, memorial tributes in Anna’s name may be made directly to the charity of one’s personal choosing.
Arrangements in care of Southland Funeral Chapel, Taber. Telephone: 1-888-223-0116.