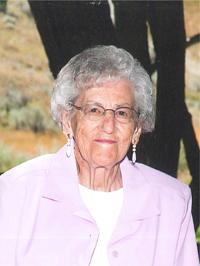 Mrs. Lillian Irene Alvina Watkins of Medicine Hat, beloved wife of the late Mr. Leslie Watkins, passed away on Saturday, February 16th, 2013 at the age of 92 years. Lillian leaves to cherish her memory her children, Louise (Wayne) Kaldestad of Nanaimo, British Columbia, Loretta (Wayne) Garrett of Elkwater, Larry (Marlene) Watkins of Medicine Hat and Lynn Watkins of Redcliff; nine grandchildren, Rhonda Clark, Steve (Dee) Keats, Heather (Dave) McGarry, Pam (Cam) Betts, Kyle (Linda) Garrett, Lanny (Tamara) Watkins, Lee (Dawn) Watkins, Taylor Watkins and Jenna Watkins; fifteen great grandchildren; two sisters, Teresa Nelson and Jeanette Page; as well as numerous nieces, nephews and many special friends. Lillian was predeceased by her parents, Rene and Lena Page; her husband Leslie on October 15th, 1989; one brother, Gilbert Page; and two sisters, Lorette Battell and Cecile Danovich. Lillian was born on January 6th, 1921 at Chauvin, Alberta where she was raised and educated. She married Leslie Watkins in Tillie, Alberta in August of 1942. Together they settled in Redcliff where Lillian worked at Dom Glass for many years until her retirement. Lillian enjoyed knitting, spending time outdoors camping and fishing and her winters spent in Arizona. She was member of the Redcliff Royal Canadian Legion for 60 years. Lillian loved spending time with her family; especially her many visits with her grandchildren. Lillian touched many lives and she will be forever remembered by all those who knew and loved her. A private family Graveside Service will be held in Redcliff Cemetery, on Thursday, February 21st, 2013 with Reverend Blaine Schaufele officiating. A Celebration of Lillian’s life with follow at the REDCLIFF ROYAL CANADIAN LEGION, 302 Broadway Avenue East, on Thursday, February 21st, 2013 at 2:00 p.m. No flowers by request. Memorial gifts in Lillian’s memory may be made to the Children’s Wish Foundation, P.O. Box 1148, Medicine Hat, Alberta, T1A 7H3. Condolences may be sent through www.saamis.com or www.gonebutnotforgotten.ca or to condolences@saamis.com subject heading Lillian Watkins. Radio funeral announcement can be heard on Wednesday around 12:35 p.m. on 93.7 Praise FM. Funeral arrangements are entrusted to SAAMIS MEMORIAL FUNERAL CHAPEL AND CREMATORIUM, “The Chapel in the Park”, locally owned and directed. Should you wish any additional information, please telephone (403)528-2599

Leave a Condolence for Don and Lisa Sweet