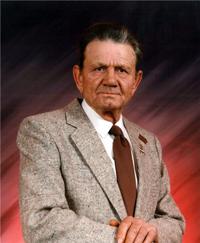 Mr. Frank Joseph Finke of Medicine Hat, beloved husband of the late Mrs. Anne Finke, passed away on Saturday, February 23rd, 2013 at the age of 88 years. Frank leaves to cherish his memory his children, Roland (Linda) Finke, Darline Urban, and Barb (Clint Sulz) Finke, all of Medicine Hat; three grandchildren, Craig (Amanda) Finke, Melissa (Lee) Waechter, and Jesse Finke; three great-grandchildren, Brianna and Brennan Finke and Isabel Waechter; his sister-in-law, Hermine Pomreinke and her family; as well as numerous nieces and nephews. Frank was predeceased by his wife, Anne; his parents; and his brother, Paul.
Frank was born on January 25th, 1925 in Dortmund, Germany. Frank enrolled in WWII at the young age of 16. He was wounded in France and later a POW in Russia – he was released in 1950. Following the war Frank learned the trade of agriculture and then tailoring. This is the time when Frank tailored his own suit which he proudly wore even in his final years. Frank married his bride, Anne, in Germany in 1952 in a beautiful historic church. Frank and Anne immigrated to Canada shortly after their marriage where they both were employed at Medalta Potteries; he then went on to earn his Plastering papers. In 1958 Frank and Anne built their farm in the Seven Persons area where they farmed for 40 years before retiring in 1994 in Medicine Hat.
Frank will always be remembered for his love of coffee, even at three in the morning. Frank was a dedicated viewer of the Weather Channel and was able to tell anyone who asked what the weather was like last month, last week, today and what it will be like next week. Sundays were one of his favorite days because of family suppers with his kids and grandkids. Frank welcomed visitors anytime, no need to call ahead. Frank loved to share his life story of his childhood and the war to anyone who would listen. He was a great, kind, gentle and caring man who will be greatly missed by his family and everyone who was blessed to be a part of his life.
Those wishing to pay their respects may do so at SAAMIS MEMORIAL FUNERAL CHAPEL on Friday from 7:00 to 9:00 p.m. or on Saturday from 9:30 to 10:25 a.m. The Funeral Service will be held in SAAMIS MEMORIAL FUNERAL CHAPEL, #1 Dunmore Road SE, on Saturday, March 2rd, 2013 at 10:30 a.m. with Reverend Dr. Shane P. Andrus officiating. In lieu of flowers, memorial gifts in Frank’s memory may be made to the Breast Cancer Society of Canada, 420 East Street North, Sarnia, Ontario,
N7T 6Y5. Condolences may be sent through www.saamis.com or www.gonebutnotforgotten.ca or to condolences@saamis.com subject heading Frank Finke. Radio announcement can be heard on Friday around 12:35 p.m. on 93.7 Praise FM. Funeral arrangements are entrusted to SAAMIS MEMORIAL FUNERAL CHAPEL AND CREMATORIUM, “The Chapel in the Park”, locally owned and directed. Should you wish any additional information, please telephone (403)528-2599