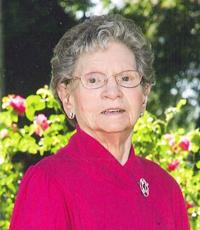 Mrs. Esther Kundert of Medicine Hat, beloved wife of the late Mr. Christian Kundert, passed away peacefully in her daughter, Marlene’s, arms on Saturday, March 2nd, 2013 at the age of 96 years. Esther leaves to cherish her memory her daughter, Marlene (Larry) Watkins of Medicine Hat; two grandsons, Lanny (Tamara) of Calgary and Lee (Dawn) of Okotoks; four great-grandchildren, Lucas, Liam and Ella of Okotoks and Hailey of Calgary; one brother, Fred (Ruth) Flaig of Medicine Hat; one brother-in-law, Karl Kundert of Medicine Hat; one sister-in-law, Grace Kundert of Red Deer; as well as numerous nieces and nephews from the Flaig, Klukus and Kundert families. Esther was predeceased by her parents, Adam and Caroline Flaig; her husband, Christian; her son, Ole Klukus; her first Husband, George Klukus; three brothers, Adam, John and Jack; and four sisters, Bertha Senft, Olga Kanewischer, Lydia Willushaw and Ella Stickel. Esther was born on May 27th, 1916 in Hilda, Alberta to Adam and Caroline Flaig. She took great pride in being one of the first of the kitchen staff of the Dr. Dan McCharles Auxiliary Hospital. Esther was very involved with her daughter, Marlene and her family. She loved spending time with her grandchildren and great-grandchildren. Esther will be sadly missed and forever remembered by her family and friends. “For those who have their mother, cherish her with care, for you’ll never know the heartache ’til she’s no longer there.” A Private Graveside Service will be held in HILLSIDE CEMETERY on Friday, March 8th, 2013. No flowers by request. Memorial gifts in Esther’s memory may be made to the Alberta Heart & Stroke Foundation, 124, 430 – 6th Avenue SE, Medicine Hat, Alberta, T1A 2S8. Condolences may be sent through www.saamis.com or www.gonebutnotforgotten.ca or to condolences@saamis.com subject heading Esther Kundert. Funeral arrangements are entrusted to SAAMIS MEMORIAL FUNERAL CHAPEL AND CREMATORIUM, “The Chapel in the Park”, locally owned and directed. Should you wish any additional information, please telephone (403)528-2599