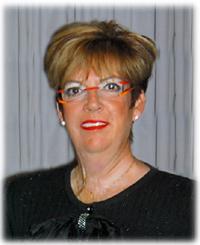 1953 ~ 2013
It is with heavy hearts that we announce the passing of Debra Cantalini-Gallant, beloved wife of Ernie Gallant.  Debra passed away while at the Medicine Hat Regional Hospital on Friday, March 8, 2013, at the age of 59 years.  Debra was born November 18, 1953 in Medicine Hat, a daughter to proud parents, Joseph and Gladys Cantalini.  She attended school in Medicine Hat and later went to the Notre Dame Academy in Wilcox, Saskatchewan.  Debra returned to Medicine Hat where she worked along side her father and aunt and uncle in the family business, The Cantalini Hotel.  She later developed an interest in cosmetics and became an accomplished cosmetician.  Debra first started working at Eaton’s in downtown Medicine Hat and later moved on to the cosmetic departments of the Bay and Sears.  Debra could always be found helping her customers with bright smile on her face!  On August 10, 1991, she married her soulmate, Ernie, in Medicine Hat where they made their home.  In 1995, her life was changed when she was diagnosed with breast cancer.   Debra maintained a positive attitude and went on to beat the disease.  During this time she retired from the job she loved and kept busy with renovating and decorating her house.  Debra was also an advocate for cancer research and started the Breast Cancer Golf Classic golf tournament that would be going on its 16th year.  With her efforts and the support of the community, she has raised nearly a remarkable four hundred thousand dollars for this worthy cause.   She was selfless and giving….that was her nature.  She enjoyed to play golf and loved going to Palm Springs for the warm climate and relaxation with Ernie.  She loved life and lived it to the fullest – she had a wonderful personality and made many good friends over the years and will be deeply missed.  Debra’s memory will be cherished by her loving husband, Ernie;  dear mother, Gladys;  step-grandmother, Leona Cantalini and many good friends.  Debra was predeceased by her father, Joseph Cantalini;  grandparents, George and Onesta Cantalini;  uncles, Alf Cantalini, Maurice Cantalini, Dr. Alfonso Cantalini and Dr. Ray Cantalini;  aunts, Elsa Cantalini and Antonietta Moramaceo;  cousin, Tony Cantalini; step-father, Nicholas Urichuk as well as Lilly Cantalini and Aldisia Cantalini.  Those wishing to pay their respects may do so at Cook Southland Funeral Chapel, 901 – 13 Street S.W., Medicine Hat on Tuesday, March 12, 2013, from 7:00 P.M. to 8:00 P.M.  The Funeral Service will be held at Cook Southland Funeral Chapel on Wednesday, March 13, 2013, at 11:00 A.M. with Reverend Father Long Vu officiating.  Interment will follow in the Cantalini family plot at Hillside Cemetery.  (Condolences may be expressed by visiting www.cooksouthland.com)    Memorial donations in Debra’s name may be made directly to the Margery E. Yuill Cancer Centre, 666 – 5 Street S.W., Medicine Hat, Alberta, T1A 4H6.  Honoured to serve the family is Cook Southland Funeral Chapel, 901 – 13th Street S.W.   Medicine Hat, Alberta   T1A 4V4  Phone 403-527-6455

No Condolences for “DEBRA CANTALINI-GALLANT”