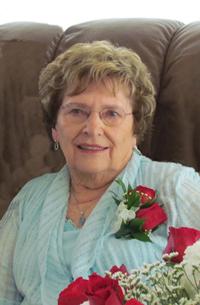 Doreen Evelyn Wilsack, beloved wife of Joseph “Joe” Wilsack, passed away on Thursday, March 7, 2013 at the age of 85 years. She also leaves to cherish her memory three children, Sharry (Dennis) McIntosh, Wendy (Jim) Nolan and Rick Wilsack (Marion Powell); four grandchildren, Kim (Peter) , Leon , Ryan (China), Joleen (Derek) & “another granddaughter” Nicole (Malcolm); six great grandchildren, Ashley, Kristopher, Cassandra, Savannah, Alex, and Georgia; her brother-in-law and sister-in-law, Raymond Wilsack and Helen Jordan.  She was predeceased by her parents, Bertha and Fred Ogilvie; daughter JoAnne (Skip) Buhr; brother, Howard Jordan; sisters, Irene Plotsky and Verna Pattison; her in-law’s, Fred, Freeman, Stanley, and Annie Wilsack.
Doreen was born and raised in Medicine Hat. In February of 1946 around Valentine’s Day, she met the love of her life, Joe Wilsack. A few months later they were married and their unwavering devotion to each other lasted over 66 years. In 1947 they began a family and Doreen stayed home, taking great pride in being a mother and exceptional homemaker. The delicious meals she prepared were always something the family looked forward to. Doreen enjoyed sewing and she excelled as a seamstress. Her children and others benefited from the many professionally tailored outfits she created. She also had a fondness for animals and nature and this was reflected in many kinds of family pets. Shortly after marriage, she and Joe left Medicine Hat and lived in several small centres throughout the three prairie provinces. In these villages and towns, Doreen always became involved in community affairs and clubs. Later, after the children left home, she shared her seamstress skills and knowledge while working in a fabric shop in Regina. With her husband’s retirement in 1989 they returned to the Hat to help care for her mother. Doreen was a fun loving, adventurous person and during this time she and Joe enjoyed travelling to southern destinations in the winters. Unfortunately in recent years, Doreen developed some health problems which curtailed travel and other activities. To every health care professional who helped with her care the family extend their sincere thanks for all that you did for her. A special thank you also to BG and Helena for being there for when she needed you.
Family and friends who wish to pay their respects may do so at the PATTISON FUNERAL HOME on Tuesday, from 6:00 to 8:00 p.m. and Wednesday from 9:00 a.m. to 1:25 p.m.  The funeral service will be held in the PATTISON CHAPEL on Wednesday, March 13, 2013 at 1:30 p.m. with Life Celebrant, David Townsend. Interment will follow in the Hillside Cemetery.  As an expression of sympathy donations may be made to the Salvation Army 164 Stratton Way SE, Medicine Hat, AB T1B 3R3. To e-mail an expression of sympathy, please direct it to: pattfh@telusplanet.net subject heading:  Doreen Wilsack, or you may visit www.gonebutnotforgotten.ca  and leave a message of condolence.  Funeral Arrangements are by the PATTISON FUNERAL HOME AND CREMATORIUM 540 South Railway St. SE, Medicine Hat T1A 4C2