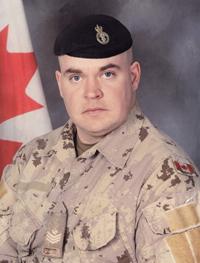 It is with great sadness that family announces the passing of Sgt. Douglas William McLoughlin who passed away suddenly on Sunday, March 3rd, 2013 at the age of 37 years at his home in Edmonton. Douglas leaves to cherish his memory his father, Brendan McLoughlin; two sisters, Tanya (Dean) Buckshaw and Angelica McLoughlin; two nephews, Anthony and Damon Buckshaw (who called him Unkle spelt with a “K” because he mis-spelt it once); his grandfather, Elmer Forbes; as well as aunts, uncles, cousins, friends, and many comrades he served with in the Canadian Army. Douglas was predeceased by his mother, Gloria McLoughlin; his grandmother, Wilma Forbes; and cousin, Kelly Allibone. Douglas was born on February 7th, 1976 in Medicine Hat. He graduated from McCoy High School in 1995 after which he worked at the 7-11 before enlisting in the Canadian Army in 1998. He served a tour of duty in Bosnia and two in Afghanistan over a period of 15 years. Being in the military was his life. He was always telling his family stories of training out in the field when it was muddy and of being covered from head to toe in mud. Douglas was immensely proud to serve his country. He loved taking his dog Myka for runs and to the dog park. He had just purchased a new Harley that he couldn’t wait to get on the road this spring. Douglas has been described as a gentle giant with a big heart and an easy smile. He will be missed by all who knew him. Those wishing to pay their respects may do so at SAAMIS MEMORIAL FUNERAL CHAPEL, #1 Dunmore Road SE, on Thursday from 6:00 to 7:00 p.m. and at HOLY FAMILY PARISH, 1451 Strachan Road SE, on Friday from 10:00 to 10:55 a.m. Vigil Rites (Prayers) will be recited in SAAMIS MEMORIAL FUNERAL CHAPEL on Thursday, March 14th, 2013 at 7:00 p.m. The Funeral Mass will be celebrated in HOLY FAMILY PARISH on Friday, March 15th, 2013 at 11:00 a.m. with Father Matthew Emmelkamp, celebrant. Interment will follow in the Family Plot at Saamis Prairie View Cemetery. Memorial gifts in Douglas’s memory may be made to the Post-Traumatic Stress Disorder Association at www.ptsdassociation.com. Condolences may be sent through www.saamis.com or www.gonebutnotforgotten.ca or to condolences@saamis.com subject heading Douglas McLoughlin. Radio funeral announcement can be heard on Thursday around 12:35 p.m. on 93.7 Praise FM. Funeral arrangements are entrusted to SAAMIS MEMORIAL FUNERAL CHAPEL AND CREMATORIUM, “The Chapel in the Park”, locally owned and directed. Should you wish any additional information, please telephone (403)528-2599

Leave a Condolence for Marlene Miller