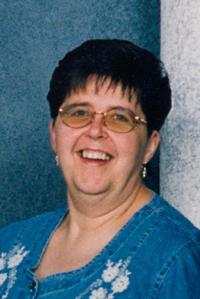 Marlys Gleed passed away on Monday, March 18, 2013, at the age of 60 years, beloved wife of Colin Gleed of Medicine Hat. She also leaves to cherish her memory, two children, Colleen (Darryl) Floberg and Nicole Gleed (Abraham Deng); five grandchildren, Jarrett Floberg, David Deng, Markom Deng, Savannah Deng and Guervara Deng as well as several aunts, uncles and cousins. She was predeceased by her parents, Jennie and Albert Dahlke and one grandson, Lucas Floberg on February 3, 2012. As a child, Marlys lived on the family farm and then moved to Medicine Hat. On July 26, 1974, she and Colin were married. Marlys was a stay at home mom until her daughters were teenagers then she began working at Walmart until the time of her passing. She volunteered for various clubs, working many bingo’s. Marlys loved to read, watch all the different sports games, and play bingo with her friends. Her grandchildren were her everything. She absolutely adored them and loved them to pieces (cuddles could always fix everything). Marlys was a kind and gentle person who would do anything for anyone and ask for absolutely nothing in return. She is very loved and missed by many. Family and friends who wish to pay their respects may do so at the PATTISON FUNERAL HOME on Friday from 12:00 – 1:55 p.m. The funeral service will be held in the PATTISON CHAPEL on Friday, March 22, 2013 at 2:00 p.m. with Life Celebrant, David Townsend. Interment will follow in the Hillside Cemetery. As an expression of sympathy donations may be made to the Heart and Stroke Foundation of Alberta, NWT and Nunavut #124 – 430 6th Ave. SE, Medicine Hat, AB T1A 2S8. To e-mail an expression of sympathy, please direct it to: pattfh@telusplanet.net subject heading: Marlys Gleed , or you may visit www.gonebutnotforgotten.ca and leave a message of condolence. Funeral Arrangements are by the PATTISON FUNERAL HOME AND CREMATORIUM 540 South Railway St. SE, Medicine Hat T1A 4C2

No Condolences for “GLEED”