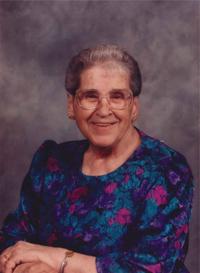 Mrs. Esther Hirsch of Medicine Hat, beloved wife of the late Mr. John Hirsch, passed away on Tuesday, March 26th, 2013 at the age of 87 years. Esther leaves to cherish her memory two children, Diane (Melvin) Holstein of Medicine Hat and their daughter, Sandi Holstein; and Dale (Bernetta) Hirsch of Beaumont, Alberta, and their children, Nadine Hirsch of Edmonton and Nicole (Levi) Theivin of Kalmar, Alberta, and children, Liam and Logan; one brother, Fred Rieger of Hanna; numerous nieces, nephews and cousins; brothers-in-law and sisters-in-law on the Hirsch side; and Teresa Lepp who was like a granddaughter to Esther. She was predeceased by her husband, John Hirsch; her parents, Wauling and Rosa Rieger; her parents-in-law, Dan and Olga Hirsch; one brother, Johnny (Magdelina) Rieger; and six sisters, Martha (Emil) Jacober, Matilda (Edwin) Reich, Katie (Reinhold) Jacober, Irene (Bill) Reich, Elsie (Harold) Wagner, and Anne (Jack) Leicht. Esther was born on January 29th, 1926 and was raised in the Vale District. She moved to Medicine Hat where she worked for Medalta Potteries for many years. Esther met John Hirsch in Medicine Hat and they were married on October 22nd, 1947. Upon John’s passing in 1983, she moved to Medicine Hat and then three years ago into the Cypress View Foundation. She enjoyed going for coffee with family and friends, playing cards, reading, and listening to music. Esther was always on the go. She will be greatly missed and lovingly remembered by her family and friends. A Celebration of Esther’s Life will be held in the MOOSE LODGE, 2800 – 13th Avenue SE, on Thursday, March 28th, 2013 at 1:30 p.m. Memorial gifts in Esther’s memory may be made to the Palliative Care Unit, Medicine Hat Regional Hospital, 666 – 5th Street SW, Medicine Hat, Alberta, T1A 4H6. Condolences may be sent through www.saamis.com or www.gonebutnotforgotten.ca or to condolences@saamis.com subject heading Esther Hirsch. Radio funeral announcement can be heard on Wednesday around 12:35 p.m. on 93.7 Praise FM. Funeral arrangements are entrusted to SAAMIS MEMORIAL FUNERAL CHAPEL AND CREMATORIUM, “The Chapel in the Park”, locally owned and directed. Should you wish any additional information, please telephone (403)528-2599