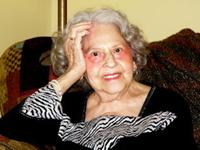 Rose Jean Michaels (nee Mihalicz), beloved wife of the late Trygve (Trix) Johnson, passed away on Saturday, March 30, 2013 at the age of 95 years.
Rose is survived by her very dear lifelong friend Lenora (Elroy) Horst, brothers Chester Mihalicz, Rudolph (Rose) Mihalicz, and Eugene (Lois) Mihalicz and numerous nieces and nephews.
Rose was predeceased by her father Steven (Istvan) Mihalicz and mother Katalin, (nee Hordos) Mihalicz; her husband Trygve (Trix) Johnston (1967), son Elmer Aberham Johnson (1958); sisters Matilda Baker (1995), Mary Reynolds (2005); brother Steve Mihalicz (1998); sisters-in-law Alma (nee Moench) Mihalicz (1995), Margaret (nee Poll) Mihalicz (1998); brothers-in-law David Reynolds (1998), and Phil Baker (2002); nieces Kate (nee Mihalicz) Bolley (2009), Joanne Baker (1956); Nephew Harold Reynolds (2002), and great nephew Preston Meyer (2004).
Rose was born October 21, 1917 on the family farm near Lestock, SK; the third child of seven children. She left the farm when she was about 19 years old and moved with her younger sister to Regina. She worked as a housekeeper and later in factories devoted to the war effort. After several moves and a brief marriage, Rose moved to Medicine Hat where she met and married the love of her life, Trix Johnson. She and Trix adopted their beloved son Elmer and were devastated by his untimely death in 1958.
Rose enjoyed many hobbies and following Trix’s death in 1967; she utilized some of them to supplement her income. Rose married George Michaels and lived for 4 years in Florida. She always missed her friends and her little house in Medicine Hat. Following her divorce, Rose studied Herbology and graduated as an Iridologist. She strongly believed the eyes were the window to the body and thus enabled her to help people improve their health. She developed a very large following and practiced until she retired at the age of 90.
Rose always had time for her friends and her many hobbies. She was well-known around Medicine Hat as a reader of cards and tea leaves. She enjoyed sewing, gardening, cake decorating, made jewellery, did ceramics, collected seashells and coins and belonged to the Doll Club, where she made her beautiful dolls. It was here that she met her dear friend Janet Moore, who along with Lenora, helped honour Rose’s wishes to remain living in her little house until the very end. Rose loved to travel and enjoyed her trips to Hawaii, China, the Carribbean and to the various locations where conferences and workshops took her.
We will remember Rose as a loving person who lived for people; people were her life. She had many friends near and far and prided herself at always being able to find time for a visit and a cup of tea. Bless you, Rose. We will miss you forever.
Those who wish to pay their respects may do so at the PATTISON FUNERAL HOME on Wednesday, April 3, 2013 from 6:30 p.m. – 9:00 p.m. and at the church on Thursday from 9:30 a.m. – 10:25 a.m. Family and friends will gather for prayers in the PATTISON CHAPEL on Wednesday evening at 7:00 p.m. The funeral mass will be celebrated at Holy Family Parish (1451 Strachan Road SE) on Thursday, April 4, 2013 at 10:30 a.m. with Fr. Philip Le celebrant. Interment will follow in the Hillside Cemetery. As an expression of sympathy donations may be made to the Heart and Stroke Foundation of Alberta, NWT and Nunavut #124 – 430 6th Ave. SE, Medicine Hat, AB T1A 2S8. To e-mail an expression of sympathy, please direct it to: pattfh@telusplanet.net subject heading: Rose Michaels, or you may visit www.gonebutnotforgotten.ca and leave a message of condolence. Funeral Arrangements are by the PATTISON FUNERAL HOME AND CREMATORIUM 540 South Railway St. SE, Medicine Hat T1A 4C2