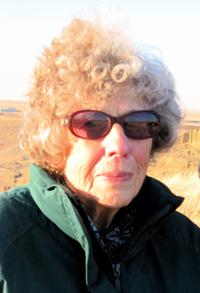 3 February 1930 – 2 April 2013
Dawn Dickinson passed away on Tuesday 2 April 2013. Dawn is survived by her brother Edward (Bob) Dickinson and sister-in-law Stamatina Anna (nee Toyla) of Guildford, England. She was predeceased by her father Robert and mother Alice Mary (nee Davidson).
With Dawn’s passing Alberta lost one of its most dedicated, knowledgeable and respected stewards of the environment. As a naturalist, Dawn’s passion for the Prairies and the Cypress Hills was limitless. As a biologist, she steadfastly maintained her principles that science and facts should guide conservation and management.
Born in Lethbridge, Dawn grew up in England where she developed her life-long love of natural landscapes through frequent walks over England’s South Downs and later over the splendour of Dartmoor. She returned to Lethbridge in her twenties, then came to Medicine Hat for a summer job surveying elk for Alberta Fish and Wildlife, which gave her an understanding of the conflicts, which could occur over land use and started her never-ending fascination with and dedication to conservation.
Her life as a biologist took her across Western Canada and the Arctic before she finally settled in Medicine Hat. Since arriving here she has tirelessly volunteered for the Grasslands Naturalists, the Federation of Alberta Naturalists, the Alberta Wilderness Association and, in the early 1990’s, Project Swiftsure.
Dawn organized a number of ambitious and successful workshops and symposia, including the Cypress Hills Forest Management Workshop and the Meridian Dam Workshop; the latter was the first time that the public was able to hear a balanced perspective on the effects of the proposed dam. She was always willing to voice or write the naturalist and scientific perspective and did so effectively in many public forums, workshops and open houses.
As a writer, she did film scripts for Karvonen Films, a brochure on sharp-tailed grouse for Fish & Wildlife, a reference on Cypress Hills ungulates, magazine articles, and many dozens of scientific and consultative reports, briefs and critiques of legislation and draft conservation plans. She also wrote books–Prairie River: a canoe and wildlife viewing guide to the South Saskatchewan River, the lyrical volume A Flight of Deer, and Caught in the Spin: the story of the wild horses of CFB Suffield.
Dawn’s conservation efforts were not confined to scientific papers and presentations. She delighted in expressing her love of nature through painting, photography and poetry. And she had fun – for many years, she delighted in canoeing adventures including a two week solo canoeing trip in the Yukon.
Dawn was considerate and gentle. Yet when dealing with environmental issues, she had a no-nonsense tenacity and inner resolve. Dawn’s single-minded determination to base decisions on sound science resulted in her receiving many awards and honours for her work as a professional zoologist, biologist and naturalist. These included the City of Medicine Hat Civic Award for the Environment (1997); Canadian Nature Federation Volunteer Award (2003); The Federation of Alberta Naturalists Loran Goulden Memorial Award for outstanding contributions to the Natural History of Alberta (2003); Prairie Conservation and Endangered Species Conference Award (2004); Alberta Wilderness Defender Award (2005). Although her determination was not always popular, she was widely respected for her credibility and integrity.
What motivated her ceaseless dedication? Her answer, in an article in Wildlands Advocate, was “You’ve had so much pleasure in the natural places you’ve worked in and been to, you have a feeling of obligation. Because you’ve been given so much, you owe the land itself something.”
Dawn requested that there be no funeral service. As a tribute to Dawn donations may be made to the Nature Conservancy of Canada, suite 830, 105 -12 Avenue SE, Calgary, T2G 1A1. (www.natureconservancy.ca)
Funeral arrangements are entrusted to SAAMIS MEMORIAL FUNERAL CHAPEL AND CREMATORIUM, “The Chapel in the Park”, locally owned and directed. Should you wish any additional information, please telephone 403-528-2599.

No Condolences for “DAWN DICKINSON”