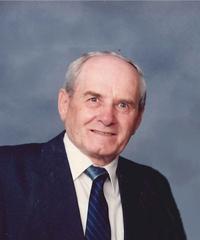 Mr. Peter Getz, beloved husband of Mrs. Veronica Getz, passed away on Saturday, April 13th, 2013 at the age of 89 years. Peter leaves to cherish his memory four children, Ron (Sharon) Getz, Debra (Jerry) Schafer, Colette (Brad) Kopec and Allen Getz, all of Medicine Hat; seven grandchildren, Michael (Lanna) Getz and their children, Amy, Brett and Matthew, Mark (Petra) Getz and their children, Gabriella and Jacob, Renee (Landon) Hillman and their son, Brayden, Dustin Schafer, Branden Schafer (Andrea), Alysha Kopec, and Kade Kopec; two brothers, Charlie (Lydia) Getz and Ralph (Frances) Getz; one sister, Phyllis Getz; and one sister-in-law, Rose Getz; as well as numerous nieces and nephews. Peter was predeceased by his parents, Frank and Elizabeth Getz; and five brothers, Valentine, Joe, John, Matt and Chris. Peter was born on December 19th, 1923 in the Prelate, Saskatchewan area. He married Veronica Ressler on October 27th, 1952 and together they farmed in the Liebenthal area. In 1965, they moved to Fox Valley, where Peter was employed with the Maple Creek School District as a custodian for twenty-two years. He was also employed with Revelstoke Lumber as yard man for fifteen years. Following his retirement at age 64, Peter and Veronica moved to Medicine Hat where they continue to make their home. He loved playing cards, and pool, watching the Blue Jays play ball and in his younger days, going fishing. Peter enjoyed his walks to the Co-op for coffee with family and friends. The greatest excitement in his life was when his grandchildren and great grandchildren came to visit. Peter will be forever missed by his family and friends. Vigil Rites (Prayers) will be said at SAAMIS MEMORIAL FUNERAL CHAPEL, #1 Dunmore Road SE, on Tuesday, April 16th, 2013 at 7:30 p.m. The Funeral Mass will be celebrated at HOLY FAMILY PARISH, 1451 Strachan Road SE, on Wednesday, April 17th, 2013 at 10:30 a.m. with Father Philip Le, celebrant. A Private Family interment will follow in the Family Plot at Hillside Cemetery. Memorial gifts in Peter’s memory may be made to the Alberta Heart & Stroke Foundation, 124, 430 – 6th Avenue SE, Medicine Hat, Alberta, T1A 2S8. Condolences may be sent through www.saamis.com or to www.gonebutnotforgotten.ca or to condolences@saamis.com subject heading Peter Getz. Radio funeral announcement can be heard on Tuesday around 12:35 p.m. on 93.7 Praise FM. Funeral arrangements are entrusted to SAAMIS MEMORIAL FUNERAL CHAPEL AND CREMATORIUM, “The Chapel in the Park”, locally owned and directed. Should you wish any additional information, please telephone 528-2599.