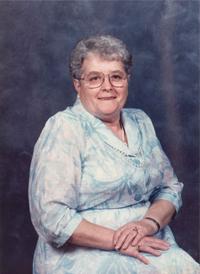 Philipine “Phyllis” Getz of Medicine Hat passed away on Tuesday, April 16th, 2013 at the age of 82 years. Phyllis leaves to cherish her memory two brothers, Charlie (Lydia) Getz and Ralph (Frances) Getz; two sisters-in-law, Rose Getz and Veronica Getz; as well as numerous nieces and nephews and their families. Phyllis was predeceased by her parents, Frank and Elizabeth Getz; and six brothers, Joe, Matt (Anna), John (Florentina), Chris, Valentine and Peter. Phyllis was born on October 26th, 1930 in the Prelate, Saskatchewan area where she was raised on the family farm. She worked as a cook at the Prelate Hospital until its closing in 1986. Phyllis then worked at the St. Angela’s Convent in Prelate as a cook until her retirement, when she moved to Medicine Hat 17 years ago. She loved baking and cooking; she was renowned for her cinnamon rolls. Phyllis also enjoyed crocheting, loved playing cards, watching curling and spending time with her family. Her faith meant everything to her; especially her “sisters”. Phyllis will be fondly remembered and forever missed by all those who knew her. The Vigil Rites (Prayers) will be held in Saamis Memorial Funeral Chapel, #1 Dunmore Road SE, on Sunday, April 21st, 2013 at 7:30 p.m. The Funeral Mass will be celebrated at St. Patrick’s Roman Catholic Church, 238 – 2nd Avenue NE, on Monday, April 22th, 2013 with Father Long Vu, celebrant. A private family interment will take place in the Family Plot at Prelate Cemetery. Memorial gifts in Phyllis’s memory may be made to the Alberta Heart & Stroke Foundation, 124, 430 – 6th Avenue SE, Medicine Hat, Alberta, T1A 2S8. Condolences may be sent through www.saamis.com or www.gonebutnotforgotten.ca or to condolences@saamis.com subject heading Phyllis Getz. Radio funeral announcement can be heard on Friday around 12:35 p.m. on 93.7 Praise FM. Funeral arrangements are entrusted to SAAMIS MEMORIAL FUNERAL CHAPEL AND CREMATORIUM, “The Chapel in the Park”, locally owned and directed. Should you wish any additional information, please telephone (403)528-2599