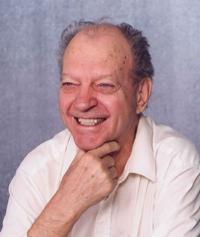 It is with great sadness we mourn the passing of our father, grandfather, and great grandfather, Ron, on Thursday, April 18th, 2013 at the age of 84 years. Ron was born December 17th, 1928 in Swift Current, Saskatchewan, grew up in Simmie and Golden Prairie, Saskatchewan in a very large, loving family who taught him the values of hard work, kindness, generosity and community. He moved to Medicine Hat in the early 1950’s, married Agnes Devalter in 1952 and later that year they moved to Eureka, California to install fire alarms with his brother in-law and sister, Lyle and Margaret Smith. In 1953, Ron and Agnes returned to Medicine Hat where he operated the Koffee Kup corner store in the Flats area of the city. He built a larger store in the same location which was known as Ron’s Grocery and he remained in the grocery business until 1975. Ron was very generous and helped many people in the community during this time. Following the sale of the grocery store, Ron, his mother Florence and brother Gerry, opened Henderson Realty which later became Century 21 Henderson Realty. Following his retirement from the Real Estate business, Ron settled in the Flats area and enjoyed fishing and gardening. Ron was an avid crib player and would always look forward to visitors dropping by for a game. He was very proud of all his siblings, children, grandchildren, great grandchildren, nieces, nephews and always shared stories of what they were doing and all their achievements. Ron also loved to tease his grandchildren, and would often ask them if they were working yet, when some of them were only 2 or 3 years old. He was kind and generous to all and will be missed by many. Ron leaves to cherish his memory seven children, Lynn (Mike) Durbeniuk, Rud (Doreen) Henderson, Laurie (Trish) Henderson, Kevin (Patty) Henderson, Debbie (Wayne) Keetley, Grant (Karen) Henderson and Randy (Rose) Henderson; seventeen grandchildren, Alecia (Evan), Alana (Greg), Kristi (Hendrik), Brandi (Miles), Travis (Michelle), Tania, Nathan (Catherine), Jennifer, Jodi, Dylan, Shayne, Garet, Tiffany, Katie, Landon, Mendi-Lee, and Dallas; nine great grandchildren, Cordelia, Bianca, Nicolaas, Micah, Zachary, Cambria, Sienna, Chael and Caden; five brothers, Dub (Gwen), Larry (Vera), Bob, Albert (Donna), and Gerry (Theresa); sister-in-law, Vi Henderson; ex-wife and friend, Agnes Henderson (Devalter) and Tino and Marg Devalter. He was predeceased by his parents, Rudyard and Florence Henderson; two sisters Margaret Smith and Vernette Allison; brother, Edmund (Ed); sister-in-law, Lynn Henderson; brothers-in-law, Lyle Smith and Les Allison; and in-laws, Sante and Amelia Devalter. He was predeceased by his companion and friend for many years, Betty Arndt and also leaves her children and grandchildren to cherish his memory. The Funeral Service will be held in WESTMINSTER UNITED CHURCH, 101 – 6th Street SE, on Wednesday, April 24th, 2013 at 1:30 p.m. with Reverend Leroy Angle officiating. As an expression of sympathy, donations may be made to the charity of your choice. A private family interment will be held prior to the service. Condolences may be sent through www.saamis.com or www.gonebutnotforgotten.ca or to condolences@saamis.com subject heading Ron Henderson. Radio funeral announcement can be heard on Tuesday around 12:35 p.m. on 93.7 Praise FM. Funeral arrangements are entrusted to SAAMIS MEMORIAL FUNERAL CHAPEL AND CREMATORIUM, “The Chapel in the Park”, locally owned and directed. Should you wish any additional information, please telephone 528-2599.