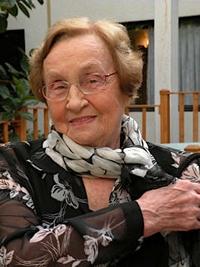 Mildred Edith Guglich of Calgary formerly of Medicine Hat passed away on Friday, April 19, 2013, at the age of 91 years, beloved wife of the late John Guglich. She leaves to cherish her memory her children, Garry Guglich (Joan Soveran) of Regina, Gordon (Irene) Guglich of North Ridge, California, Janet Guglich of Calgary and Carol (Tom) Storz of Sherwood Park; five grandchildren, Shelly Guglich, Anne Guglich, Tammy (Glenn) Jorgensen, Cory (Nancy) Sehn and Ian (Cristi) Storz; four great grandchildren, Erin, Carl, Lucas, and Ava; her sister, Florence Wagner as well as numerous nieces and nephews. She was predeceased by her parents, Ruth and Peter Sandhoff; her husband John on May 21, 2005; four brothers, Tom, Hilton, John and George and one grandson, Claude. Mildred was born on a farm near Maxim, SK where as a young girl she worked side-by-side with her father and brothers doing the daily chores. In order to complete her schooling from Grades 9-12 at Weyburn Collegiate, it was necessary for Mildred to work for board & room. Upon completion of high school she married John Guglich on October 7, 1939 in Weyburn, they moved to the Prelate district and took over John’s father’s homestead. In 1948 when their home on the farm was destroyed by fire, John, Mildred and family moved to the town of Prelate and continued to farm. They farmed there for 52 years until retiring to Medicine Hat in 1993. In October 2004, they celebrated their 65th wedding anniversary. Mildred spent her life as a loving wife, mother, grandmother, and great grandmother. Those who wish to pay their respects may do so at Holy Family Parish on Tuesday morning from 9:30 – 10:25 a.m. The funeral mass will be celebrated at Holy Family Parish (1451 Strachan Road SE) on Tuesday, April 23, 2013 at 10:30 a.m. with Fr. Philip Le celebrant. Interment will follow in the Hillside Cemetery. To e-mail an expression of sympathy, please direct it to: pattfh@telusplanet.net subject heading: Mildred Guglich, or you may visit www.gonebutnotforgotten.ca and leave a message of condolence. Funeral Arrangements are by the PATTISON FUNERAL HOME AND CREMATORIUM 540 South Railway St. SE, Medicine Hat T1A 4C2