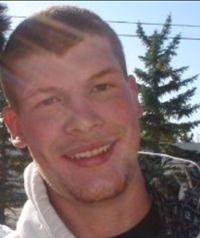 With great sadness we announce the passing of our son, brother, uncle and friend to many, Murray John David Gillis, at the age of 27 years on April 19th, 2013. Murray was born on December 22nd, 1985 in Medicine Hat where he was raised and educated. Murray was an avid skateboarder for many years and enjoyed practicing his art along with his pals at the City Bus Terminal until the authorities put a stop to it. Murray could make it downtown from the top of 2nd Street Hill in less than a minute and he had a pile of broken skateboards from giving it his all. Golf was also on his list of favorite sports and he went out on the course whenever he could. Murray began the career he loved to the end by starting as a lease hand with Pantara Drilling at Rainbow Lake, Alberta at the age of 18. At the time of Murray’s passing he had been promoted to Driller with Trinidad Drilling at Fort Mac. Murray is survived by his mom, Edie Gillis of Luseland, Saskatchewan; his dad, Dale Gillis of Vegreville, Alberta; four sisters, Dana (Ray) Gackle of Medicine Hat, Lindell Beck of Luseland, Betty Gillis of Campbell River, BC, and Lana Beck of Vancouver, BC; and two brothers, Alan Gillis and Shane Gillis of Medicine Hat. He also leaves behind special friend, Tanis and her daughter, Megan. Murray became an uncle at the “ripe old age” of three and is survived by special nephews, Tyler Beck and Steven Meissner of Luseland, and Jaron and Jevon Gackle of Medicine Hat; as well as Betty and Alan’s children. Murray was predeceased by his grandparents, Allan and Lillian McDonald and Ernest and Evelyn Gillis as well as his aunt, Lynne Pederson and uncles, Larry and Jerry Gillis. Murray had a heart of gold and would do anything for anyone and he will be sadly missed forever. Someday Murray and Milt will have that game of golf and enjoy a cold Kokanee. Peace Murdawg. The Graveside Service will be held in HILLSIDE CEMETERY, 10th Avenue & Gershaw Drive SW, on Friday, April 26th, 2013 at 2:00 p.m. with Gary W. Goran officiating. Those wishing to attend are asked to meet at the cemetery gates at 1:45 p.m. Memorial gifts in Murray’s memory may be made to the SPCA, 55 Southwest Drive SW, Medicine Hat, Alberta, T1A 8E8, or to the Medicine Hat Skateboarding Association, 312 – 3rd Street NW, Medicine Hat, Alberta, T1A 6K9. Condolences may be sent through www.saamis.com or www.gonebutnotforgotten.ca or to condolences@saamis.com subject heading Murray Gillis. Radio funeral announcement can be heard on Friday around 12:35 p.m. on 93.7 Praise FM. Funeral arrangements are entrusted to SAAMIS MEMORIAL FUNERAL CHAPEL AND CREMATORIUM, “The Chapel in the Park”, locally owned and directed. Should you wish any additional information, please telephone (403)528-2599