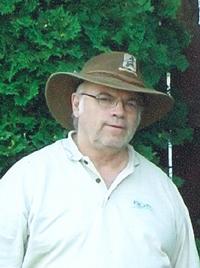 It is with great sadness we mourn the passing of Ray Morse Johnson, April 27, 2013 at the age of 67 years. Ray leaves to cherish his memory, his wife Marlane and two sons, Bruce Johnson of Medicine Hat and Jason Johnson (Tara Redekop) of Brooks, also a sister-in-law Betty Johnson of Leduc, Alberta, and his brother and sister-in-law, Dennis and Jo-Anne Statham of Olds, Alberta, a brother-in-law, Alwyn Rode of Medicine Hat, and a special niece Ivy and nephew, Don Mohn of Byemore, Alberta as well as nephew, Bill Davis of Red Deer, Alberta and Uncle Raymond Edler of Calgary, Alberta. Ray was predeceased by his father, Martin and mother, Lillian Johnson both of Medicine Hat; his brother Roy Johnson of Leduc, his father and mother-in-law, Herb and Jean Rode of Medicine Hat and brother-in-law Deric Rode. Ray was born on April 8, 1946 in Drumheller to Martin and Lillian Johnson. He enjoyed fishing, hunting and camping with his family. He worked for the Forestry Department in Elkwater for many years then started his career with the Canadian Pacific Railway on April 8, 1974 retiring May 5, 2005. The funeral service will be held in the PATTISON CHAPEL on Friday, May 3, 2013 at 11:00 a.m. with Life Celebrant, David Townsend officiating. As an expression of sympathy donations may be made to the Margery E. Yuill Cancer Centre (Medicine Hat Regional Hospital) c/o 666 5th Street SW, Medicine Hat, AB T1A 4H6 or to the Canadian Diabetes Association, Medicine Hat and District Branch 102 73 7th Street SE, Medicine Hat. T1A 1J2. To e-mail an expression of sympathy, please direct it to: pattfh@telusplanet.net subject heading: Ray Johnson, or you may visit www.gonebutnotforgotten.ca and leave a message of condolence. Funeral Arrangements are by the PATTISON FUNERAL HOME AND CREMATORIUM 540 South Railway St. SE, Medicine Hat T1A 4C2

No Condolences for “JOHNSON”