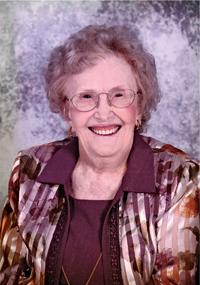 Christina “Chrissie” Emelia Hittel (nee Marum, Clark) passed away peacefully early on May 3rd, 2013 at the age of 98 years. Chrissie leaves to cherish her memory, two sons, Larry (Janice) Clark of Waterloo, Iowa, and Darryl (Roxanne) Clark of White Rock, BC; five grandchildren, Tamara Clark, Laura Jovel-Clark, Jennifer (Clark) Mallari, Nicole (Clark) Allen, and Eric Clark; special nephew, William Maslasz; and three great-grandchildren, Lauren Mallari, Luke Mallari and Elina Jovel. Chrissie is predeceased by her father and mother, Thomas and Hilda Marum; brothers, Albert and Gunder; sister, Perene; husbands, Albert Clark and Edmund Hittel; and her grandson, Daniel Clark. Chrissie was born on the family farm at Limerick, Saskatchewan on April 1st, 1915. She grew up in Lisieux (Joeville) and the Scout Lake area and attended Moyer School near Rockglen, Scout Lake School, and Moose Jaw Normal School. She was a beloved teacher having taught in several rural schools in Saskatchewan, and Connaught School, Crescent Heights School and Webster Niblock in Medicine Hat. On September 24th, 1940, she married Albert Clark, widowed in January 1964, and married Edmund Hittel in October 1977, widowed in April 1997. Chrissie always kept active and was a cultural leader for the Lindholmen VasaLodge, a news correspondent for the Vasa American magazine and a local paper, and as a long-time member of the former Grace Lutheran Church. Chrissie will be lovingly remembered by her family, friends and former students. Those wishing to pay their respects may do so at SAAMIS MEMORIAL FUNERAL CHAPEL, #1 Dunmore Road SE, on Monday from 7:00 to 9:00 p.m. and at ST. PETER LUTHERAN CHURCH, 758 – 8th Street SE, on Tuesday from 10:00 to 10:55 a.m. The Funeral Service will be held at ST. PETER’S LUTHERAN CHURCH on Tuesday, May 7th, 2013 at 11:00 a.m. with Pastor Garth Wehrfritz-Hanson officiating followed by a luncheon in the Church Hall. Interment will follow in the Family Plot at Hillside Cemetery. Memorial gifts in Chrissie’s memory may be made to the Palliative Care Unit, Medicine Hat Regional Hospital, 666 – 5th Street SW, Medicine Hat, Alberta, T1A 4H6. Condolences may be sent through www.saamis.com or www.gonebutnotforgotten.ca or to condolences@saamis.com subject heading Chrissie Hittel. Radio funeral announcement can be heard on Monday around 12:35 p.m. on 93.7 Praise FM. Funeral arrangements are entrusted to SAAMIS MEMORIAL FUNERAL CHAPEL AND CREMATORIUM, “The Chapel in the Park”, locally owned and directed. Should you wish any additional information, please telephone (403)528-2599