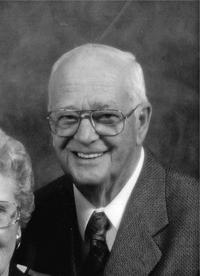 Frederick Baumbach passed away on Friday, May 3rd, 2013 at the age of 91 years. Fred is survived by his beloved wife of 66 years, Inez; daughter, Joan (Greg) Côté; son, Donald (Lisa) Baumbach; grandchildren, Celesty (Dandy), Daniel, Minota (Mark), Thomas (Jennifer), Finley, and Kayleigh; step-grandchildren, Kevin and Sheniél; six great-grandchildren; four step-grandchildren; as well as numerous nieces and nephews. He is survived by three sisters, Annie, Dora, and Margaret. Fred was predeceased by his parents, Robert and Caroline; his brothers, Abe, Ed, William, Gideon, and Lawrence; and his sisters, Emma, Christine, Lydia, and Clara. Fred was born near Burstall, Saskatchewan while his parents were visiting Caroline’s family farm. They returned to Medicine Hat six days later and he has lived there ever since. Fred grew up in Medicine Hat and his cheerful personality helped him develop many long-lasting friendships. A talented athlete, Dad played baseball and hockey, and loved fishing. All his children and grandchildren have many fond memories of camping and fishing trips with Grandma and Grandpa. Dad’s first job was at Alberta Foundry and Machinery. He was then involved in a family painting business with his Dad and his brother, Gid. He often spoke of white-washing the outside of St. Patrick’s Church as one of the big jobs they tackled. Fred and Inez were married in 1947 and had a long and happy life together. Dad then began working on the Building and Bridges section of the CPR. In 1962, he started working at NW Nitro Fertilizers which later became Western Co-op. He retired from there in 1983. After retiring, he and Mom enjoyed fishing and camping with friends and family. They travelled to many places in their motorhome, enjoying the scenery and musical presentations. He was a loving person and we will have many memories of his story-telling and wonderful sense of humour. Those wishing to pay their respects may do so at SAAMIS MEMORIAL FUNERAL CHAPEL, #1 Dunmore Road SE, on Monday from 7:00 to 9:00 p.m. The Funeral Service will be held in ST. JOHN’S PRESBYTERIAN CHURCH, 504 – 2nd Street SE, on Tuesday, May 7th, 2013 at 1:00 p.m. with Reverend Dr. Nancy Cocks and Reverend Diane Beach, co-officiating. A Private Interment will take place in the Family Plot at Saamis Prairie View Cemetery. Memorial gifts in Fred’s memory may be made to St. John’s Presbyterian Church, 504 – 2nd Street SE, Medicine Hat, Alberta, T1A 0C6, or to the Alberta Heart & Stroke Foundation, #124, 430 – 6th Avenue SE, Medicine Hat, Alberta, T1A 2S8, or to the Canadian Cancer Society, #102 – 1865 Dunmore Road SE, Medicine Hat, Alberta, T1A 1Z8. Condolences may be sent through www.saamis.com or www.gonebutnotforgotten.ca or to condolences@saamis.com subject heading Frederick Baumbach. Radio funeral announcement can be heard on Monday around 12:35 p.m. on 93.7 Praise FM. Funeral arrangements are entrusted to SAAMIS MEMORIAL FUNERAL CHAPEL AND CREMATORIUM, “The Chapel in the Park”, locally owned and directed. Should you wish any additional information, please telephone (403)528-2599