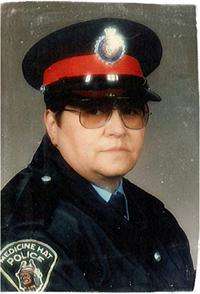 Mrs. Elsie Pryce, of Brooks, Alberta beloved wife of the late Mr. Frank Pryce, passed away on Sunday, May 5th 2013 at the age of 68 years. Elsie leaves to cherish her memory her daughter, Tammy Harper; and her grandson Matheu Harper of Medicine Hat. Elsie was predeceased by her husband Frank Pryce; both her parents William and Grace Lightfoot; as well as her brother, James Lightfoot. Elsie was born in Maple Creek, Saskatchewan. She worked at the Medicine Hat Police Department for many years. Elsie was one of the first SPCA Constables for the area. She performed Public Safety Service and did Dangerous Goods Control. Elsie’s heart belongs not only to her family but to all animals. She was a past Noble Grand of Rebekah Lodge. Elsie was a very musical person and enjoyed jamming with friends. The Funeral Service will be held in SALVATION ARMY Church, 164 Stratton Way SE, Medicine Hat, AB, on Tuesday, May 7, 2013, at 1:00 PM with Major Murray Jaster officiating. In lieu of flowers the family asks that memorial gifts in Elsie’s memory may be made to the Canadian Cancer Society, 102 – 1865 Dunmore Road SE, Medicine Hat, Alberta, T1A 1Z8, or to the S.P.C.A. 55 Southwest Drive SW, Medicine Hat, AB, T1A 8E8. Condolences may be sent through www.saamis.com or www.gonebutnotforgotten.ca or to condolences@saamis.com subject heading Elsie Pryce. Funeral arrangements are entrusted to SAAMIS MEMORIAL FUNERAL CHAPEL AND CREMATORIUM, “The Chapel in the Park”, locally owned and directed. Should you wish any additional information, please telephone (403)528-2599