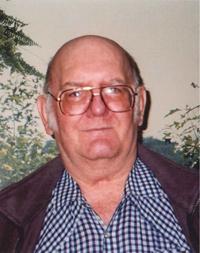 Mr. Larry Seitz of Medicine Hat passed away on Friday, May 10th, 2013 at the age of 81 years. Larry leaves to cherish his memory one brother, Jack Seitz; two sisters, Viola Ashley and Anne Sponholz; and 33 nieces and nephews. Larry was predeceased by was his parents, George and Madeline Seitz; six brothers, Fred (Cora), Reiny (Adele), Bill (Sylvia), Dave (Margaret), Ted (Mary) and Art (his first wife, Irene and second wife, Hazel); three sisters, Esther (Mike) Stuber, Alice (August) Romeike and Beth (Ed) Gorman; two brothers-in-law, Wilf Ashley and Earl Sponholz; one sister-in-law, Lorry Seitz; and four nephews, David Seitz, Lyle Seitz, Ken Gorman and Brian Lemke. Larry was born on August 9th, 1931 in Medicine Hat where he was raised and educated. He gave up his job in a motor and car supply store in Lethbridge to care for his parents until the time of their passing in 1977. He then moved to the Garden Apartments where he remained until moving into Assisted Living for the past 4 years. Larry delivered newspapers for the Medicine Hat News for many, many years until the day he was admitted into the hospital. Larry was a kind and gentle man and was loved by many; especially the staff and residents at South Country Village. Those wishing to pay their respects may do so at SAAMIS MEMORIAL FUNERAL CHAPEL, #1 Dunmore Road SE, on Monday, May 13th from 7:00 until 9:00 p.m. at the WUERFEL AUDITORIUM, 1720 Bell Street SW on Tuesday, May 14th from 1:00 until 1:55 p.m. The Funeral Service will be held in the WUERFEL AUDITORIUM on Tuesday, May 14th, 2013 at 2:00 p.m. with Reverend Bob Findley officiating. A private interment will take place at Hillside Cemetery. Memorial gifts in Larry’s memory may be made to the Haven Care Centre, 1720 Bell Street SW, Medicine Hat, Alberta, T1A 5G1 or to the Alberta Heart & Stroke Foundation, 124, 430 – 6th Avenue SE, Medicine Hat, Alberta, T1A 2S8. Condolences may be sent through www.saamis.com or www. gonebutnotforgotten.ca or to condolences@saamis.com subject heading Larry Seitz. Radio funeral announcement can be heard on Monday around 12:35 p.m. on 93.7 Praise FM. Funeral arrangements are entrusted to SAAMIS MEMORIAL FUNERAL CHAPEL AND CREMATORIUM, “The Chapel in the Park”, locally owned and directed. Should you wish any additional information, please telephone 528-2599.