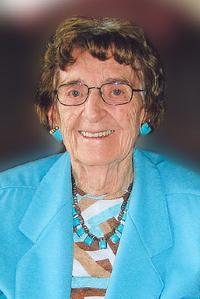 Naomia “Jean” Christensen of Medicine Hat passed away Friday, May 17, 2013, at the age of 88 years. She was predeceased by her loving husband Robert James Christensen in 2002, and her son Russell in 1967. Jean is survived by one son Robert “Brian” Christensen of Innisfail Alberta and two grandchildren, Melissa of Assiniboia, Saskatchewan and Christopher of Red Deer, Alberta.  Jean was born on October 27, 1924 in Neepawa, Manitoba to the late Annie Graham-Nicholson. Jean met Bob in Medicine Hat and they married in 1947. In 1952, Bob was hired on with Haliburton which gave them the opportunity to move around Western Canada as well as the Middle East and South America. They eventually settled in Medicine Hat in 1983.  Sister Christensen was a dedicated Jehovah’s Witness who served faithfully for over half her life. A special thank you to the brothers and sisters at the Kingdom Hall who showed Jean love and support. The family would like to thank the staff at the Medicine Hat hospital for providing such attentive care.  The memorial service will be held on Saturday May 25, 2013 at 1:30 p.m. at the Kingdom Hall of Jehovah’s Witnesses (62 Valleyview Drive SW) Mr. William Rae will be officiating. In lieu of flowers as an expression of sympathy those who wish may direct their donations to the Kingdom Hall Fund 62 Valleyview Drive SW, Medicine Hat T1A 8E4. To e-mail an expression of sympathy, please direct it to: pattfh@telusplanet.net subject heading: Jean Christensen, or you may visit www.gonebutnotforgotten.ca and leave a message of condolence. Funeral Arrangements are by the PATTISON FUNERAL HOME AND CREMATORIUM 540 South Railway St. SE, Medicine Hat T1A 4C2

No Condolences for “CHRISTENSEN”