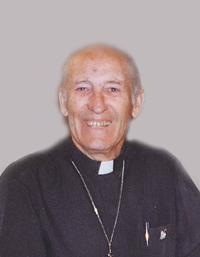 Father Reginald “Reg” Alcock of Ralston, passed away on Monday, May 27th, 2013 at the age of 88 years. Father Reg leaves to cherish his memory his children, Laurie Alcock (Lorraine Brown) of Redwood Meadows, Alberta, Avril Alcock (Rance Foulston), Frances (Tom) Knight, both of Cold Lake, Alberta and Antony Alcock of Edmonton; five grandchildren, Michael, Devlin, Tiffany, Lindsey and Garret; three great grandchildren, Seth, Brody and Caprice; as well as numerous nieces and nephews. Father Reg was predeceased by his parents, Thomas and Edith Alcock; four brothers, Edward, Norman, George and Harold; and one sister, Kathleen. Father Reg was born in Champion, Alberta on December 24th, 1924. At the age of 19, he volunteered for the Royal Canadian Air Force and served in the Canadian Army until 1946. Upon returning to civilian life, he entered St. John’s Seminary College. After graduation he was active with various parishes throughout the years in Alberta and the Yukon. He was the Base Chaplain at CFB Suffield, which brought him to Medicine Hat. Father Reg was also the Parish Priest for Holy Trinity Anglican Church. He was an Anglican priest from 1952 until his passing on May 27th, 2013. Father Reg was a long standing member of the Blue Knights Motorcycle Club. Father Reg loved life, people, motorcycles and cars. His sincere, caring manner, love of life and wonderful sense of humour warmed the hearts of all who knew him. Our “Fr. Reg” will be sadly missed. The Funeral Service will be held in ST. BARNABAS ANGLICAN CHURCH, 635 – 4th Street SE, on Monday, June 3rd, 2013, at 1:00 p.m. with Cannon R. Greene officiating and Dr. David J. Carter assisting. Interment will follow at Saamis Prairie View Cemetery. Memorial gifts in Father Reg’s memory may be made to the Charity of One’s Choice. Condolences may be sent through www.saamis.com or www.gonebutnotforgotten.ca or to condolences@saamis.com subject heading Father Reg Alcock. Radio funeral announcement can be heard on Friday around 12:35 p.m. on 93.7 Praise FM. Funeral arrangements are entrusted to SAAMIS MEMORIAL FUNERAL CHAPEL AND CREMATORIUM, “The Chapel in the Park”, locally owned and directed. Should you wish any additional information, please telephone (403)528-2599