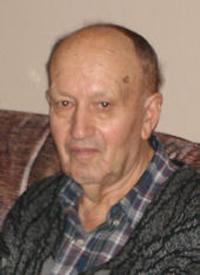 Oskar Fried of Medicine Hat passed away on Friday, May 31, 2013, at the age of 87 years, beloved husband of the late Ella Fried. He leaves to cherish his memory his children, Bruno (Kathy) Fried and Rose Hall all of Medicine Hat; three grandchildren, Joshua (Carollyne) Fried, Matthew Hall and Tasha (Tyler) Faulhafer; three great grandchildren, Brooklyn, Brody and Bentley; brothers and sisters-in-law, Line Gill, Helmut and Erna Gill, Emil and Sandy Gill, Alma and Adolf Schneider, Adele Schwabe and Hilma and Jack Schlenker as well as numerous nieces and nephews. He was predeceased by his parents, Margarethe and Heinrich Fried; his wife, Ella on October 23, 2000 and his brothers-in-law, Waldemar Gill and Max Schwabe. Oskar was born in the Ukraine on August 28, 1925. In 1949 he immigrated to Canada. Shortly thereafter he met Ella Gill and they were married on August 16, 1952. Oskar worked for IXL Industries for 39 years, retiring at age 65. He resided in his own home until October 2012 where he spend many hours taking care of his yard. In late October, he moved to South Country Village where he resided til his passing. The family would like to thank the Staff at South Country Village for the wonderful care they provided him during his stay there. Family and friends who wish to pay their respects may do so at the PATTISON FUNERAL HOME on Tuesday, from 6:00 to 8:00 p.m. and at the church on Wednesday from 1:00 to 1:55 p.m. The funeral service will be held in the Temple Baptist Church (606 7th Street SW) on Wednesday, June 5, 2013 at 2:00 p.m. with Pastor Marcel Mitchell officiating. Interment will follow in the Hillside Cemetery. As an expression of sympathy donations may be made to the charity of your choice. To e-mail an expression of sympathy, please direct it to: pattfh@telusplanet.net subject heading: Oskar Fried, or you may visit www.gonebutnotforgotten.ca and leave a message of condolence. Funeral Arrangements are by the PATTISON FUNERAL HOME AND CREMATORIUM 540 South Railway St. SE, Medicine Hat T1A 4C2

No Condolences for “FRIED”