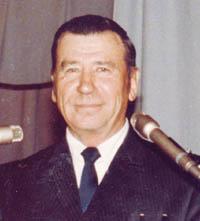 Jack Lightfoot
November 20, 1932 – May 30, 2013
Jack Lightfoot of Robsart, Sask. passed away May 30, 2013 at the age of 80.
He is survived by his wife Jean and his children: Steve (Jackalin), Will and Whitney, Kelly (Amy), Austin, Cody, Jocelyn, Wyatt, Frances (Russell) Affleck, his sister Betty Ribling and his best friend Lorne Warberg. He is survived by sisters-in-law Betty (Dennis) Baer, Shirley (Jim) Svenson, Georgina (Dale) Flavel, Arlene Lowenberg, Charlotte Lowenberg and numerous nieces and nephews.
Jack was predeceased by his parents Charles and Fanny Lightfoot, his stepbrother Chuck (Marg), his stepsister Edna (Joe) Schinold, his brothers-in-law Norman Ribling, Phillip Lowenberg, Gordon Lowenberg and a special uncle Harry Lightfoot.
Young Jack (as uncle Harry called him) was born on November 20, 1932 in a farm house just a 1/4 mile north of Robsart cemetery. In 1940 they moved to a farm yard two miles east of Robsart where he resided off and on until his death.
His education career started when he attended Olive School until Grade 8. He finished high school in Robsart. At the age of 17, he attended Normal School in Moose Jaw. After graduation he returned and taught school in Vidora and then Robsart. He attended the University of Saskatchewan starting in 1955. He graduated in 1959 with a Bachelor of Arts and a Bachelor of Education.
After graduation he became principal of Frontier School. In 1961 he moved to Regina and taught Latin, Physics and Math at Martin Collegiate.
In 1963 he married Jean Lowenberg of Windthorst. In 1969 he moved to Milden as principal, then moved his completed family (three kids now), to Rockglen in 1972 where he became principal of a much bigger school. In 1980 the family returned to the farm and Jack taught off and on in Consul until he retired in 1989. Jack was a gifted educator who made Math, Physics and Trig fun and easy to learn.
His love of farming never left him. Even during his teaching career he returned to the farm  most weekends, holidays and summers. He loved to grow things. His garden was one of his greatest pleasures and he grew enough to feed his family and all their friends. When people would come to visit there was always a trip to the garden and a pail of potatoes to take home.
He loved to be on a horse and spent a lot of his life working horses and cows. It amazed his grandchildren when he would tell them of working as a hired man on the Irvie Fleming ranch and traveling back and forth to Robsart on horseback for the weekends.
Haying was also one of Jack’s favorite seasons. He spent countless hours on an old John Deere AR with a six foot mower until he graduated up to a New Holland hay swather. Once everything was said and done and the haying procedure was complete, he would spend days, weeks, months hauling and stacking his bales. He was very proud of his creations.
He took pilot training in Regina and spent time flying small planes. He could also play the piano and guitar, singing along as he played first to his kids and then to his grandkids. He could recite poetry and scripture out of the blue and talk about books he had read when he was at school. He was a great historian telling stories to family and friends recalling events from around the area. He was always interested in worldly affairs. He was also great in philosophy as Jack and Lorne spent countless hours over tea discussing farming plans, politics and the weather. Many cups of tea were drank as they worked hard to solve problems on a daily basis.
The funeral service was held June 3, 2013 at St. Mary’s Anglican Church in Maple Creek with Reverend Peter Boote officiating. Interment took place in Robsart cemetery. Active pallbearers  were Austin Ligthtfoot, Cody Lightfoot, Will Lightfoot, Leonard Heydlauff, Grant Brown and Allistair Tillier. Friends who wish to, may remember Jack with a gift to St. Mary’s Anglican Church Building Fund, Maple Creek, Sask.
To email an expression of sympathy you may visit www.gonebutnotforgotten.ca.
Binkley’s Funeral Service, Maple Creek and Leader, in charge of arrangements. 306-662-2292

No Condolences for “LIGHTFOOT”