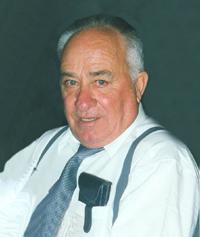 Carl Reid of Medicine Hat passed away peacefully on Friday, June 14, 2013, at the age of 78 years with his family at his side. He was one of five children of the late Violet and Cecil Raymond Reid. He leaves to cherish his memory his children, Sheila (Randy) Benallack of Medicine Hat, Carl (Linda) Reid of Didsbury, Kelly (Anita) Reid of Cypress County and Charlene (Rob) Schell of Medicine Hat; twelve grandchildren, Rai-Lyn (Josh) Chisholm, Jason (Jenna) Mabbot, Virginia Cox, Rebecca (Dakota) Kramer, Amanda (Cory) Milligan, Harrison Reid, Karliana Reid, Chelsey (Rudy) Alvarez, Jayden Schell, Jory Schell, Ryan Benallack and Brynn (Amir) Omerovic; nine great grandchildren; two sisters, Loreen (Elmer) Haack and Gladys St. Laurent; one brother, Ivan (Jean) Reid; one sister-in-law, Rena Reid as well as numerous nieces and nephews. He was predeceased by his older brother, Harvel Cecil Reid and one brother-in-law, Marcel St. Laurent. Carl was born on a farm near Hillandale, Saskatchewan. Carl bought the farm across the road from his parents where he married and started his family. He sold the farm and moved to Mankota, Saskatchewan, where he ranched until 1975. He then purchased the Rodeway Inn Motel in Swift Current, Saskatchewan. In 1997, Carl retired and moved to Medicine Hat in order to be closer to his children and grandchildren. Family and friends who wish to pay their respects may do so at the PATTISON FUNERAL HOME on Tuesday, from 12:00 to 12:55 p.m. The funeral service will be held in the PATTISON CHAPEL on Tuesday, June 18, 2013 at 1:00 p.m. with Life Celebrant, David Townsend. As an expression of sympathy donations may be made to the Palliative Care Unit c/o Medicine Hat Regional Hospital, 666 5th Street SW, Medicine Hat, AB T1A 4H6. To e-mail an expression of sympathy, please direct it to: pattfh@ telusplanet.net subject heading: Carl Reid, or you may visit www. gonebutnotforgotten.ca and leave a message of condolence. Funeral Arrangements are by the PATTISON FUNERAL HOME AND CREMATORIUM 540 South Railway St. SE, Medicine Hat T1A 4C2

No Condolences for “CARL ORR REID”