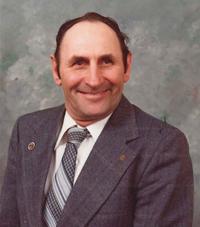 Mr. Leo Schafer of Medicine Hat, beloved husband of the late Rose Schafer, passed away peacefully with family by his side at the Carmel Hospice on Monday, June 17th, 2013 at the age of 85 years. Leo leaves to cherish his memory two sons, Larry (Gloria Sirman) of Grande Prairie and Wilf (Betty) of Richmound; two grandchildren, Ryan (Brittney) of Richmound and Krista (Clint) Wirth of Coaldale and their children, Karley and Kendall; one brother, Simon and one sister, Lenora (Elroy) Horst, both of Medicine Hat; his special companion, Doreen MacKinnon of Medicine Hat, two sister in-laws, Katie Schafer and Marie Aberle, two bother in-laws, Archie Culbert and Emil Frederick; as well as numerous nieces and nephews. Leo was predeceased by his parents, Wendlen and Margaret; his great-grandson, Kade Wirth; two brothers, Mike and John; and two sisters, Clementine Frederick and Rosemary Culbert, and a brother in-law John Aberle. Leo was born on August 4th, 1927 on the family farm east of Schuler. On November 7, 1950 he married Rose Aberle and they resided on a farm NW of Schuler. In 1958 they relocated in the Richmound area where they farmed until 1982, when they retired to Medicine Hat. Leo was an avid ball player and also loved fishing, bowling, dancing and watching sports, he rarely missed attending a Tiger’s game. He loved travelling and greatly enjoyed the company of his family and friends, especially his grandchildren. Leo will be deeply missed by all those who knew and loved him. Vigil Rites (prayers) will be said at SAAMIS MEMORIAL FUNERAL CHAPEL, #1 Dunmore Road SE, on Thursday, June 20th, 2013 at 7:30 p.m. The Funeral Mass will be celebrated in HOLY FAMILY PARISH, 1451 Strachan Road SE, on Friday, June 21st, 2013 at 10:30 a.m. with Father Philip Le, celebrant. A Private Interment will follow in the Roman Catholic Section at Hillside Cemetery. Memorial gifts in Leo’s memory may be made to Holy Family Parish, 1451 Strachan Road SE, Medicine Hat, Alberta, T1B 4V3, or to the Hospice Palliative Care Society, 640 – 3rd Street SE, Medicine Hat, Alberta, T1A 0H5. Condolences may be sent through www.saamis.com or www.gonebutnotforgotten.ca or to condolences@saamis.com subject heading Leo Schafer. Radio funeral announcement can be heard on Thursday around 12:35 p.m. on 93.7 Praise FM. Funeral arrangements are entrusted to SAAMIS MEMORIAL FUNERAL CHAPEL AND CREMATORIUM, “The Chapel in the Park”, locally owned and directed. Should you wish any additional information, please telephone (403)528-2599