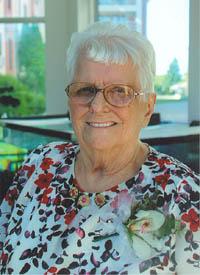 Gloria Violet McClure of Medicine Hat passed away on Friday, June 21, 2013, at the age of 91 years, beloved wife of the late Harold McClure. She is survived by her step-son, Lawrence (Irene) Reimer of Marysville, B.C.; her sons, Dennis (Twila) Reimer of Lethbridge, Dale (Peggy) Reimer of Calgary and Ken (Sheila) Reimer of Medicine Hat. She was loved by her grandchildren, Nicole (Jake) Fluker, Kurtis Reimer, Brianne (Scott) Hamilton, Whitney Reimer, Jordan Reimer and Gillian Reimer (fiancé? Doug Minshull), along with five great grandchildren, Emmitt and Tayah Fluker, Seth and Ardyn Reimer and Jack Hamilton. She is also survived by her sister, Stella Larson of Tisdale, Saskatchewan. She was predeceased by her parents, Peter and Caroline Mervold; her husbands, Isaac Reimer, John Sheltens and Harold McClure. Mom had a full life as a minister in the Evangelical Church, a phone operator, a hair dresser and a custodian, while still being a wife, mother and a home maker. In her later years she used her passion for knitting to knit hundreds of baby outfits, touques and afghans for Mexican children. She will be missed. The family would like to thank Dr. Greef and the staff in the Palliative Care at the Medicine Hat Regional Hospital for their care and compassion. Family and friends who wish to pay their respects may do so at the PATTISON FUNERAL HOME on Wednesday, from 9:00 a.m. – 1:25 p.m. The funeral service will be held in the PATTISON CHAPEL on Wednesday, June 26, 2013 at 1:30 p.m. with Rev. George Brandt officiating. In lieu of flowers sympathy donations may be made to Hillcrest Evangelical Missionary Church, 3785 13th Ave SE, Medicine Hat, AB T1B 1J2. To e-mail an expression of inesympathy, please direct it to: pattfh@telusplanet.net subject heading: Gloria McClure, or you may visit www.gonebutnotforgotten.ca and leave a message of condolence. Funeral Arrangements are by the PATTISON FUNERAL HOME AND CREMATORIUM 540 South Railway St. SE, Medicine Hat T1A 4C2

No Condolences for “MCCLURE”