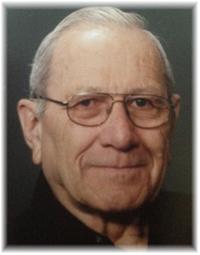 Mr. William (Bill) Rempel, beloved husband of Mrs. Harriet Rempel of Medicine Hat, passed away on Sunday, June 23, 2013 at the age of 83 years. Bill also leaves to cherish his memory his children, Stuart (Cheryl) Rempel, Barbara Rempel, and Linda Rempel (Tom Coffey); four grandchildren, Randal (Gisela) Rempel, Logan Rempel, Hailey Rempel and Lane Rempel. Bill was predeceased by his parents Jacob and Anna Rempel and one son Randall Rempel. Bill was born in Didsbury, Alberta on March 12, 1930. He served his country in the Korean War from 1950 until 1952, where he received several medals and awards. Bill met his wife Harriet in Duchess, where they were married in 1953. Bill worked in the agriculture industry for many years. Following his retirement, he settled in Medicine Hat. Among his favorite pastimes were reading, gardening, and puzzle making. He also enjoyed watching his grandchildren’s sporting events whenever possible, as well as spending quality time with family. Funeral service will be held at Thom’s funeral home and Reception Centre in Duchess, Alberta at 2:00 PM on Thursday, June 27. Interment will follow at Duchess Cemetery. Pastor Mike Landry officiating. Arrangements in care of THOM’S FUNERAL HOME AND RECEPTION CENTRE, Duchess. For further information please visit www.thomsfuneralhome.com or call (403) 501-1010.

No Condolences for “REMPEL”