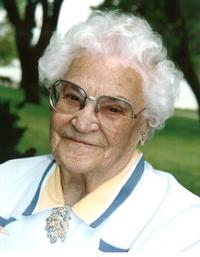 1913 ~ 2013
It is with full hearts that we announce the passing of our beloved mom, sister, nana, and great-nana Vera Rhoda Althen (nee Robinson) at the age of 99 years. She passed away peacefully on June 24th with her adoring family by her side. Nana was born on December 21, 1913, fourth oldest girl in a family of 9 children.
She was predeceased by her loving husband of 59 years, John C. Althen in 1994 and by sisters Florence (Leon) Weiss, May (Manuel) Weiss, Doris (Arvid) Larson; brothers Vic (Mary) Robinson and Albert Robinson.
Vera is survived by her son Don and wife Mary and their 5 children, Grant (Charlene) Althen, Margo (Bob) Schneyder, John Althen, Scott (RaeAnn) Althen and Suzanne Tividar; twelve Great Grandchildren and three Great Great Grandchildren. Vera is also survived by a brother Ken (Margaret) Robinson; two sisters, Nada (John) Light and Ethel Boyer; sister-in-law Bernice Robinson and numerous nieces and nephews.
Vera was born in Copper Cliff, Ontario, and at the age of 6 years moved to Hacke, later named Twin River, commonly known as Del Bonita where she continued to live for the majority of her life. She was a hard working pioneer woman who had a deep love of horses, cattle and the land that she called home. Throughout her life Vera maintained a positive attitude, never complaining and always persevering to get the job done. Vera was known for her quick wit and fast retort, always with a mischievous sparkle in her eye.
Family and friends are invited to pay their final respects from 12:00 pm to 12:30pm on Thursday, June 27, 2013 at MARTIN BROTHERS RIVERVIEW CHAPEL, 610-4 Street South, Lethbridge, AB. A Funeral Service will follow at 1:00 pm at MARTIN BROTHERS RIVERVIEW CHAPEL, with Reverend Bob Wallace, officiating. Interment will follow in the Milk River Cemetery.
In lieu of flowers, memorial donations may be made to the Lethbridge Therapeutic Riding Association, RR8-24-6, Lethbridge, Alberta T1J 4P4.
Funeral arrangements entrusted to Martin Brothers Funeral Chapels Ltd. 1-800-382-2901
Send condolences at www.mbfunerals.com

No Condolences for “VERA RHODA ALTHEN”