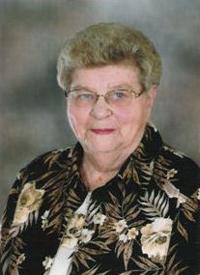 Mabel Vossler – Cranmer of Medicine Hat passed away on Thursday, June 27, 2013, at the age of 84 years. She leaves to cherish her memory her son, Terry (Shanon) Vossler of Coleman; two grandchildren, Robin Vossler (Laurie Abbott) of Brooks and Leslie Vossler (Sean McKenna) of Blairmore; one great grandchild, Kaydance Vossler; her step-children and their families, Keith (Sheri) Cranmer of Calgary, Ken (Joan) Cranmer and Diana (Les) Roth all of Medicine Hat; one brother, John Deg of Swift Current; her sisters, Clara Vossler, Evelyn Janke, both of Brooks, Hilda Raw of Medicine Hat and Dorothy Dreger of Regina as well as numerous nieces and nephews. She was predeceased by her parents, Barbara and Carl Deg; her first husband, Otto Vossler in 1961 and her second husband George Cranmer in 1994; her daughter, Wendy Phillips and one grandson, Michael in 1972; one brother, Carl Deg and two sisters, Mary Seitz and Lilly Finkbeiner. Mabel was born in Glen Bain, Saskatchewan and after her marriage to Otto Vossler in 1948, they moved to Tilley, Alberta. Following Otto’s passing she worked for Canada Post as a rural mail carrier for many years. In 1980, she moved to Medicine Hat where she worked as a cook for the Medicine Hat Hospital. It was in Medicine Hat that she met and married George Cranmer. She will be fondly remembered by her extended family and the many friends she made over her life time. A celebration of Mabel’s life will be held in St. John’s Presbyterian Church, Taylor Hall (504 2nd Street SE) on Friday, July 5, 2013 at 2:00 p.m. with Rev. Dr. Nancy Cocks officiating. In lieu of flowers or donations, please do a random act of kindness, pay it forward in Mabel’s memory. To e-mail an expression of sympathy, please direct it to: pattfh@telusplanet.net subject heading: Mabel Vossler – Cranmer, or you may visit www.gonebutnotforgotten.ca and leave a message of condolence. Funeral Arrangements are by the PATTISON FUNERAL HOME AND CREMATORIUM 540 South Railway St. SE, Medicine Hat T1A 4C2

No Condolences for “VOSSLER – CRANMER”