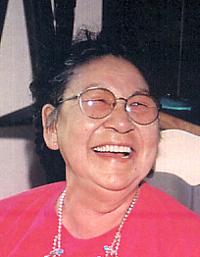 Alice Masak French (nee Smith), beloved Wife of Dominick FrenchAlice Masak French, born on June 29, 1930 at Baille Island, NWT, died on July 5, 2013 at the Souris Health Centre near her home in Souris, Manitoba. She is mourned by her beloved husband of 53 years, Dominick, her surviving sons Charles (Rosie) and Daniel Nahogaloak of Cambridge Bay, Nunavut, daughter Carole (David) Kravitz of Yellowknife, NT, son Barry (Ann) French of Stockton, MB and daughter Katherine (Colin) Goring of Alexander, MB. She has numerous grandchildren and great-grandchildren.She was a wise and wonderful lady who will be sorely missed. In addition to her many accomplishments as an artist and craftsperson, she was also the author of two books, My Name is Masak and The Restless Nomad, that told the story of her early life growing up in the Mackenzie Delta Region of the Northwest Territories and her later life, adventures and travels. Included in her stories is a recounting of her life in the Anglican Mission residential school system in Aklavik. She is also the author of numerous poems.Masak was pleased to share her story and the culture of the Inuit with school children in the Manitoba, Alberta, Nunavut and the Northwest Territories. She was an enthusiastic supporter of Aboriginal Day ceremonies wherever she was living which included Souris for the last six years. She was well known in the other places she lived including Churchill, Grand Rapids, Boissevain, Pinawa and Lac Du Bonnet in Manitoba and Medicine Hat, Alberta, Wexford, Ireland and all around the Mackenzie Delta and Cambridge Bay.She is also survived by her brothers Tommy and Duane Smith, sister Vicky of Inuvik, NT, sisters Lily and Rhoda of Alaska, and her two special nieces, Laverna Smith of Tuktoyaktuk, NT and Shirley Smith.Funeral service was held on Tuesday, July 9, 2013 at the Faith Community Baptist Church Souris, Manitoba with Rev. Don Oddie officiating. In memory of Alice donations may be made to the Souris Health Centre c/o ARHA Box 10 Souris, Manitoba R0K 2C0. Kowalchuk’s Funeral Home Souris, Manitoba in care of arrangements. Condolences may be made at kowalchuks.net

No Condolences for “FRENCH”