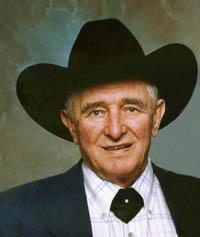 Ernie Wallace Brost was born on February 3, 1928 in Medicine Hat, Alberta.   He grew up with his parents, Fred and Adelia Brost, on a mixed farm 18 miles southwest of Walsh, which was homesteaded in 1904 by his grandfather, David Brost.While still a young boy, he was struck with polio and spent about six months in the basement of the Medicine Hat Hospital with other afflicted patients. He always credited his grandmother’s prayers and the wisdom of a wonderful doctor that he survived with minimal damage.Ernie attended Sentinel elementary country school. He then attended   Alexandra High in Medicine Hat, living with his grandmother and grandfather Lehr, with whom he had a very close and special relationship.  After completing grades 9 and 10, he  returned home and helped his father on the farm.   At 18 he met and fell in love with the new neighborhood school teacher, Jean McKay from Birch Hills, Sask. They became husband and wife on July 17, 1948 and spent 35 wonderful years together.  It was always special for them that they shared the same birthday, Feb. 3.Ernie and Jean started their married life together on the home place south of Walsh while Ernie’s parents and his younger brother, Art, moved to a ranch 14 miles south of Piapot, Sask., which Fred had purchased a few years earlier. In November, 1951 Ernie’s beloved father died of a heart attack at the age of 47, and in 1955 Ernie and Jean sold the homestead and purchased  an adjoining ranch south of Piapot. Ernie and Art operated as Brost Brothers until 1962 when the partnership dissolved and they divided the property into separate ranches.  Ernie and Jean enjoyed their life, raising their children, Valerie born in 1952 and Myron in 1955, and were overjoyed with the arrival of grandchildren Kendra, Tanis, Ryan and Tricia. Loss came again to the family in December, 1983 when Jean died from cancer at the age of 56. Ernie remarried twice, in 1985 to Frances Weiss and in 2004 to his present wife, Louise Stoppler.  Over the years Ernie enjoyed travelling, including trips to Canada’s east and west coasts, Phoenix,   California, Florida, Cuba, Mexico, Dominican Republic,  and Caribbean and Alaskan cruises. He  enjoyed at least twice-yearly trips to Watrous Pool and Boulder mines and believed in the healing benefits he received from both. He also went on many trips with his fifth wheel trailer and more recently a motorhome. Ernie always embraced the western lifestyle. He had a true love for ranching and all his animals. He had a special connection with horses, having a good eye for picking great horses and it was heartbreaking when he was no longer able to enjoy riding. For a few years he proudly owned a registered quarter horse stallion, Chub. He established a fine herd of Black Angus cattle he was proud of. Ernie rarely missed a branding party, cattle or horse sale. He took in many rodeos from small towns and Murraydale Stampede to the Calgary Stampede, attended the Canadian Finals in Edmonton over 20 times and the national finals in Las Vegas three times. He didn’t miss the annual bull sale in Calgary for  50 years. Even when he no longer needed to purchase any bulls he could be found in the barns visiting and having a drink with all his friends.  Ernie was an active community member, bringing his work ethic and common sense to many boards, committees and clubs.  In the 1960s he  was active in the Saskatchewan  Quarter Horse Association, serving as president for two years and making many lifelong friends.  For many years he was an exhibitor and later a judge at various horse shows in Sask.  He was a councillor with the RM of Piapot from 1962 to 1971, was on the Cypress Lodge board for 25 years, received an honory life membership in Branch 7 of Sask. School Trustees Association for his 36 years on the Maple Creek  board from 1967 to 2003. He was a charter member of the Maple Creek  Elks and Piapot Lions Clubs. He served as a 4-H leader and assistant leader of both the Bear Creek Beef Club and High Country Light Horse Club.  Also included in this long list of serving is the  Piapot and Bear Grazing Co-op, Maple Creek Agricultural Society, hospital board, and Maple Creek & District Opportunities Inc. Ernie was always a strong man who loved life to the fullest. In February 1996 he underwent a successful quadruple bypass surgery. A few years ago he suffered a minor heart attack and then a major one on June 20. Although he was on the road to recovery, and was soon to be released from the hospital, only needing to regain enough strength to climb the six stairs into his home, he sadly suffered a severe stroke on June 29 and again fought a long and hard battle to stay with us, but in the early morning of July 3 he passed away with his children and wife at his side.Ernie will be forever remembered, cherished and missed by his wife Louise, his son Myron (Helen), his daughter Valerie (Lyle), grandchildren Kendra, Tanis (Matan), Ryan, and Tricia, great-grandsons Rusty, Sawyer, Stav, Keanu and Kai. He was predeceased by his father Fred, mother Adelia, wife Jean, brother Art, and numerous aunts, uncles and cousins.  The funeral service was held at the Assembly of God Church in Maple Creek on Sat., July 6, 2013 at 2 p.m. with Pastor Hans Martens officiating. Interment took place at the Maple Creek Cemetery. Active pallbearers were Ernie’s grandchildren, Kendra Springsteel, Tanis Shefer, Ryan Audette, Tricia Audette, godson Pernell Lehr, and friend Keith Winzer. Honorary pallbearers were all those who shared in Ernie’s life.Ernie, rest in peace as you unite with the loved ones who have gone before and know that you will always live in the hearts of those you left behind.Friends who wish to may remember Ernie with a gift to the Assembly of God Church, Cowboy Church or the Southwest Healthcare Trust (Bunkhouse Fund).To email an expression of sympathy you may visit www.gonebutnotforgotten.ca.Binkley’s Funeral Service, Maple Creek and Leader, in charge of arrangements.  306-662-2292

No Condolences for “BROST”