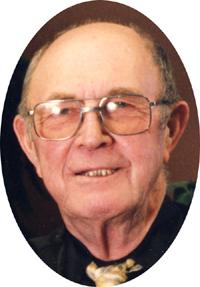 Harry Bruce McEwan, age 90 years, passed away on July 25 at the Regina General Hospital. Funeral services were held at Tompkins on August 2 with Reverend Eleanor Rockabar officiating. Interment was at the Tompkins Cemetery with Binkley’s Funeral Service in care of arrangements.
Pallbearers were John (Woody) Woodward, Brian McGillivray, Dale (Slide) Fernquist, Wayne Carlson, Richard Hughes and Clayton McGregor. The Tompkins Community Choir accompanied by Cindy Nelson on the piano and Fred Reinhart on the guitar provided the lovely music for the service. Night-watch, Harry’s favorite song, was beautifully performed by the Reinhart “kids” – Freddy, Judy, Irene and Kenny. The Royal Canadian Legion provided an honour guard.
Harry was predeceased by his parents Henry and Ethel (Rathwell), McEwan, beloved wife Gladys, three brothers; Francis, James, Dalton and sister Ethel Gilbert and several brothers and sisters-in-law.
Left to celebrate his memory are his nieces: Loreen Davis, Eleanor Davis, Binkie (Bill) Gladstone and nephews: Jimmy (Brenda) McEwan and Ken Gilbert and their families as well as three step children and their families: Dennis (Diane) Wiens, Donna (Gerald) Ford and Raymond (Wanda) Wiens.
Harry joined the army in 1941 and served in the medical corps in England. He is a life member of the Royal Canadian Legion, Tompkins Branch No. 140.
Harry was a  man of many talents. During his early life he raised sheep, worked at Chester Hallquist’s dairy, ran the livery barn for Pat Garland and ran the Tompkins Dray. During his time on the farm as a bachelor, he visited he neighbours regularly and they became like family. The Reinhart family was especially dear to him. Irene says he brought them pet lambs and taught them music.
In 1960 he took a course in Ottawa and became a barber. His barber shop included a pool hall where he taught many young people how to “pocket the eight.” When the pool hall closed he hired on with various farmers in the area until he retired to the little house in Tompkins and became a gardener extraordinaire.
Music was a constant for Harry, there was music wherever he went. He was a teacher, a student and a sharer of music his whole life. Of all the instruments he played, the banjo was his favorite. His love for music was infectious.
In 1963 Harry married the recently widowed Gladys Wiens. In later conversation he said, “I waited a decent amount of time and then went courtin’.” It was  a match made in heaven. He joked that he became a husband, a father and a grandfather all in one day.
Harry will be remembered by his family and friends for his kindness, generosity and his fun-loving spirit. Rest in peace.
Those who wish may remember Harry with a gift to the Alzheimer’s Society.
To email an expression of sympathy you may visit www.gonebutnotforgotten.ca.
Binkley’s Funeral Service, Maple Creek and Leader, in charge of arrangements. 306-662-2292

No Condolences for “McEWAN”