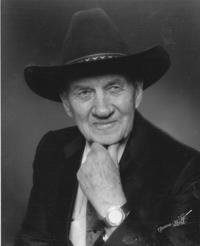 The family of Stan Popick is sad to announce he has saddled up and crossed the great divide on Friday, August 9th, 2013 at the age of 95 years. He will meet up with his bride of 55 years Norma, who passed away on September 27th, 2005. He is survived by his two sons; Bob (Sharon) Popick, their children, Jody (Scott Knapp) and Brett; Mick (Jacqui) Popick and their children Cory (Christy), [and their daughter Haven] and Christopher (Amy) [their children Macy and Samuel]; and by his daughter, Jean Challifoux and her daughter, Andrea McCallister (Pat O’Leary) [their children Callum, Bailey and Abigail]. He is also survived by one sister, Kay Ralph, two brothers-in -law, Doug (Jeannine) Wagner, Dale (Attie) Wagner; and one sister-in-law, Mary Messmer; as well as numerous nieces and nephews. Stan was born September 20th, 1917 on the family farm (Sec- 2, Twp-1, Rge- 25, W3) south of Robsart on the Canada, USA border. He even attended school in the United States as it was the closest school available making many lifelong friends there. Stan worked on the family ranch until 1945 when he then went to work for the PFRA at Battle Creek Community Pasture. He married Norma Jean Wagner in 1950 and began raising his family in the Divide area until 1967, when he transferred to the Bitter Lake Pasture north of Maple Creek. Stan and Norma remained working there until Stan’s retirement in 1975. In 1973, Stan and Norma bought the Cypress Hills Riding Academy and ran it together every summer until 1986. They also spent 15 happy winters in Apache Junction, Arizona. Later they bought a cabin at Simmie, Saskatchewan where they enjoyed many years of fishing together. Stan and Norma finally settled in Medicine Hat in 1991 where he lived until his passing. Stan and Norma did everything together including fishing, hunting and camping, they had a real passion for the outdoors. Bob and Mick will fondly remember the many hunting and fishing trips they took with their Dad and Mom. Jean was Dad’s caretaker in the last several years as his eyesight was taken by macular degeneration. Her brothers and their families will be forever grateful for the care Jean provided their Dad. Stan was very proud of his five grandchildren and six great-grand children and was always so pleased when they came to visit. Stan loved to discuss horses and cattle and the people who worked them, he had many interesting stories to tell about his life as a cattleman. We will miss his stories and the history he would share from his 95 years of life, but mostly we will miss the best Dad, Grandpa and Father-in-law any of us could hope to have. The Funeral Service will be held in SAAMIS MEMORIAL FUNERAL CHAPEL, #1 Dunmore Road SE, on Wednesday August 14th, 2013 at 1:30 p.m. with Gary W. Goran officiating. Interment will follow in the Family Plot at Saamis Prairie View Cemetery. Memorial gifts in Stan’s memory may be made to the CNIB (Canadian National Institute for the Blind) 102, 520 – 2nd Street SE Medicine Hat, Alberta T1A 0C6 or to the Medicine Hat Regional Hospital 4 West, 666 – 5th Street SW Medicine Hat, Alberta T1A 4H6 Condolences may be sent through www.saamis.com or www.gonebutnotforgotten.ca or to condolences@saamis.com subject heading Stan Popick. Funeral arrangements are entrusted to SAAMIS MEMORIAL FUNERAL CHAPEL AND CREMATORIUM, “The Chapel in the Park”, locally owned and directed. Should you wish any additional information, please telephone (403)528-2599