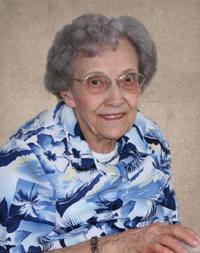 Hilda Sauter, beloved wife of the late Fred Sauter of Medicine Hat, passed away peacefully in her sleep on Friday, August 2, 2013 at the age of 89 years. Hilda leaves to cherish her memory four children: Ronald (Leslie) Sauter of Hanna, and his children, Craig (Kristi), Troy (Natalie) and Conway and their mother Betty Sauter; Sharon (Vern) Fauth of Calgary and their children, Darin (Andrea), Byron (Melanie) and Sean (Alexis); Larry (Helen) Sauter of Medicine Hat and their children, Kelly (Wayne) Wittevrongel and Terri; Caroline Sauter (Wayne Chesley) of Medicine Hat and their children, Alexandra and Adrian: ten great-grandchildren, Justis and Jarod Sauter, Darby and Carson Sauter, Kaylor Sauter, Amelia and Carmen Fauth, Jessica, Cheyenne and Colter VanEe: two sister-in-law, Ida Seitz of Medicine Hat and Frieda Sauter of Ponoka; as well as numerous cousins, nieces, nephews and good friends. She was predeceased by her husband, Fred Sauter, her parents, Christian and Rosina Seitz; four brothers, Fred (Regina) Seitz, Christian (Martha) Seitz, Herb (Christiana) Seitz and Gotfred Seitz; and two sisters, Olga Seitz and Molly (Albert) Wutzke; brother-in-law, Wallace Sauter and Alfred (Susan) Sauter and one sister-in-law Erna (Art) Boschee.
Hilda was born on May 7, 1924 in the district of Little Plume, Alberta and attended the Goose Lake School. On October 30th, 1943 she married Fred Sauter of the Thelma District. In the early years of their marriage Fred and Hilda farmed and ranched in the Elkwater and Robinson Districts. In 1957, they moved to the Irvine area where they lived until semi-retiring to Medicine Hat in 1980. After Fred’s passing, Hilda spent 10 enjoyable years in Chinook Village followed by 3 years in Good Samaritans. Many wonderful memories were created during family get togethers while enjoying meals prepared by Hilda, especially all of the favourite German specialties. Hilda had an incredible work ethic no job was ever too big for her to tackle and was usually completed at the utmost speed. Fred and Hilda during their retirement years enjoyed camping, attending rodeos and travelling. All of Hilda’s family were the love of her life and she will be deeply missed by all. Those wishing to pay their respects may do so at SAAMIS MEMORIAL FUNERAL CHAPEL on Tuesday August 13th, 2013 from 7:00 p.m – 9:00 p.m, and at VICTORY LUTHERAN CHURCH on Wednesday August 14th, 2013 from 1:00 p.m – 1:55 p.m. The Funeral Service will be held in VICTORY LUTHERAN CHURCH, 2793 Southview Drive SE, Medicine Hat, on Wednesday August 14th, 2013 at 2:00 p.m with Reverend Barrett Scheske officiating. Interment will follow in the Family Plot at Hillside Cemetery. As an expression of interest those wishing to remember Mrs. Hilda Sauter may do so with a gift to the Alzheimer Society (Palliser Region) 401D – 3rd Street SE Medicine Hat, AB T1A 0G8 Condolences may be sent through www.saamis.com or www.gonebutnotforgotten.ca or to condolences@saamis.com subject heading Hilda Sauter. Funeral arrangements are entrusted to SAAMIS MEMORIAL FUNERAL CHAPEL AND CREMATORIUM, “The Chapel in the Park”, locally owned and directed. Should you wish any additional information, please telephone (403)528-2599