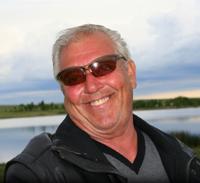 Mr. Richard “Rick” Joseph McDonald, beloved husband of Mrs. Betty McDonald of Medicine Hat, passed away on Friday, August 16th, 2013 at the age of 63 years. Along with Betty, left to cherish his memory are his 2 children, Mary-Lynn McKay (Rob Anderson) and Tony (Becky) McDonald; his granddaughter, Isabelle McDonald; and step grandson, Joel Anderson; 2 brothers, Geard (Pauline) and Calvin (Mabel); 6 sisters, Eva Collier, Ann (Jim) Dollimont, Rita (Larry) Morris, Margaret Organ, Susie (Noel) Baker and Theresa (Gerard) Organ; 6 brothers-in-law, Al (Cammy), Jim (Elizabeth), Matt (Bette), Vince (Susan), Allison (Mary) Warren and Tony Durnford; and one sister-in-law, Dora (Bert) Cluett; as well as numerous nieces and nephews. Rick was predeceased by his parents, Michael and Mary Jane McDonald; his brother, Jack McDonald; 2 brothers-in-law, Abe Organ and Gordon Collier; and his sister-in-law, Margaret Durnford. Rick was born in Bay d’Espoir, NFLD on July 27th, 1950 where he was raised until moving to Ramea, NFLD at age 19 where he met the love of his life and wife of 42 years, Betty. After raising two children in Ramea, Rick and Betty moved to Medicine Hat in 1997 where they were blessed to have a large family and many friends to spend time with. Rick earned the nick name of “Tricky Ricky” by pulling numerous pranks on his family and friends. He was always the life of the party and above all else was a beloved husband, father and grandfather. The Funeral Mass will be celebrated in ST. PATRICK’S ROMAN CATHOLIC CHURCH, 238 – 2nd Avenue NE, on Tuesday, August 20th, 2013 at 11:00 a.m. with Father Philip Le, celebrant. Memorial gifts in Rick’s memory may be made to the Palliative Care Unit, c/o Medicine Hat Regional Hospital, 666 – 5th Street SW, Medicine Hat, Alberta, T1A 4H6. Condolences may be sent through www.saamis.com or www.gonebutnotforgotten.ca or to condolences@saamis.com subject heading Rick McDonald. Funeral arrangements are entrusted to SAAMIS MEMORIAL FUNERAL CHAPEL AND CREMATORIUM, “The Chapel in the Park”, locally owned and directed. Should you wish any additional information, please telephone (403)528-2599