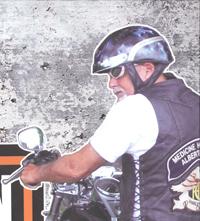 Mr. Howard Ernst of Medicine Hat, passed away on Sunday, August 11th, 2013 at the age of 62 years. Howard leaves to cherish his memory his brother, Robert “Bob” (Anne) Ernst of Vermilion; nieces and nephew, Breanna Ernst, Brittany Ersnt, Michael Ernst and Alysha (Darren) Grosky; as well as many good friends. Howard was predeceased by his parents, Clifford and Edith Ernst. Howard was born on July 2nd, 1951 in Medicine Hat where he lived until the time of his passing. He took great pride in his yard work and enjoyed riding his Harley. Howard was a member of the Royal Canadian Legion and a H.O.G. member. Those wishing to pay their respects may do so at SAAMIS MEMORIAL FUNERAL CHAPEL, #1 Dunmore Road SE, on Monday, August 19th, 2013 from 7:00 until 9:00 p.m. The Funeral Service will be held in SAAMIS MEMORIAL FUNERAL CHAPEL on Tuesday, August 20th, 2013 at 10:30 a.m. with Reverend Barrett Scheske officiating. Interment will follow in the Family Plot at Saamis Prairie View Cemetery. A Memorial Ride in Howard’s memory will take place in the afternoon from 4:00 until 6:00 p.m. at the Irvine Centennial Campground, Irvine, Alberta. Memorial gifts in Howard’s memory may be made to the Alberta Heart & Stroke Foundation, 124, 430 – 6th Avenue SE, Medicine Hat, Alberta, T1A 2S8. Condolences may be sent through www.saamis.com or www.gonebutnotforgotten.ca or to condolences@saamis.com subject heading Howard Ernst. Radio funeral announcement can be heard on Monday around 12:35 p.m. on 93.7 Praise FM. Funeral arrangements are entrusted to SAAMIS MEMORIAL FUNERAL CHAPEL AND CREMATORIUM, “The Chapel in the Park”, locally owned and directed. Should you wish any additional information, please telephone (403)528-2599