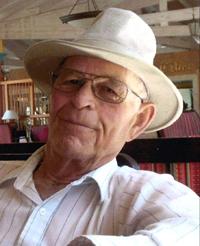 1938 – 2013
Gerald Norman Sureman, of Grassy Lake, passed away peacefully at home on Tuesday, August 27, 2013 at the age of 74 years.
A private burial service will be held at the Saamis Prairie View Cemetery on Saturday, August 31, 2013.
A reception will be held at the Grassy Lake Community Hall, Grassy Lake on Sunday, September 1, 2013 at 5:00 P.M. Condolences may be forwarded by visiting our website at www.southlandfuneral.com.
Besides Minerva (nee Kusler), his loving wife of fifty one years, he is survived by their two daughters Nancy (Doug) Scott of Medicine Hat, Pam Sureman of Taber and by two precious granddaughters, Afton and Alliott Scott of Medicine Hat as well as Sonja and Jason Mellema of Grassy Lake (affectionately known as his two Dutch grandchildren). Jerry is also survived by his brother Donald (Maxine) Sureman of Seven Persons, numerous nieces and nephews.
He was predeceased by his parents Adolph and Barbara Sureman and his youngest brother and sister-in-law Ken (Irene) Sureman.
Jerry was raised south of Seven Persons before moving to Grassy Lake in 1967. He spent most of his career with the St. Mary’s River Irrigation District before retiring in 1999. Retirement was never boring. He drove potato truck until age of seventy, tended his large yard and garden and was taking care of the Grassy Lake Landfill right up until his passing. His last working day was Saturday, August 10, 2013. Jerry was diagnosed with cancer on August 14, 2013. He will be sadly missed but will live on in the hearts of those he loved.
If friends so desire, memorial tributes in Jerry’s name may be made directly to the Taber and District Hospital, 4326 – 50 Avenue, Taber, Alberta T1G 1N9.
Arrangements in care of Southland Funeral Chapel, Taber. Telephone: 1-888-223-0116.

No Condolences for “JERRY SUREMAN”