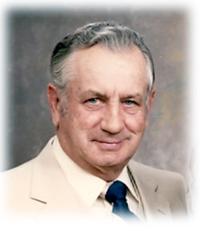 1918 ~ 2013
Arthur Otto ‘Art’ Kurpjuweit, beloved husband of the late Alice Jane Kurpjuweit (nee Heidinger), passed away at the Riverview Care Centre in Medicine Hat on Wednesday, November 6, 2013, at the age of 95 years.  Art was born in Medicine Hat on August 17, 1918.  He was raised and lived near Seven Persons where he continued to farm after moving to Medicine Hat in the early 1950’s.  He married the love of his life, Alice Heidinger, in Medicine Hat on April 3, 1944.  Art loved the outdoors and was an avid hunter.  His memory will live on in the hearts of his children, Judy (Larry) Rath of Lethbridge and Carol (Jim) Bassett of Seven Persons;  grandchildren, Kevin (Deanna) Rath, Shanlee (Wade) Gyorfi, Shaun (Katie) Bassett;  seven great-grandchildren;  brother, Lavern Kurpjuweit;  sister, Evelyn Price as well as numerous nieces, nephews, cousins and other extended family.  He was predeceased by his parents, Ferdinand and Katherine Kurpjuweit.  In honouring Art’s wishes, a private graveside service was held at Hillside Cemetery yesterday, Friday, November 8, 2013, at 11:00 A.M. with Pastor Clarence Knodel officiating.  Family wish to extend their heartfelt appreciation to the nurses and staff at the Riverview care centre for the excellent care Arthur received over the past two years.  (Condolences may be expressed by visiting www.cooksouthland.com)  Those wishing to remember Art may do so through a donation to the Canadian Diabetes Association, 102, 73 – 7 Street S.E., Medicine Hat, Alberta, T1A 1J2.  Honoured to serve the family is COOK SOUTHLAND FUNERAL CHAPEL, 901 – 13 Street S.W., Medicine Hat, Alberta, T1A 4V4.  Telephone:  403-527-6455.

No Condolences for “ARTHUR KURPJUWEIT”